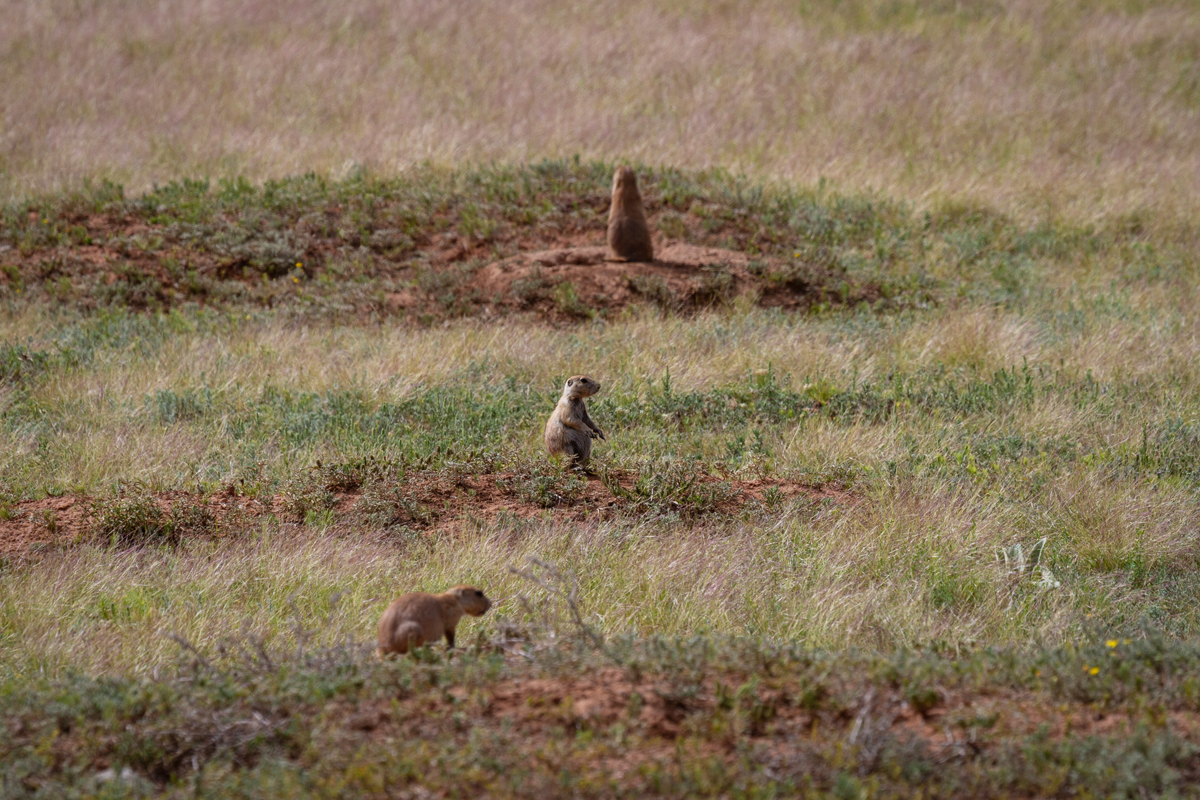 After a pretty good night’s sleep we loaded the car back up and headed out with Devil’s Tower being our destination. We didn’t have this in our plans originally, but I had an opportunity many years ago to see it and didn’t, and since it wasn’t too far out of our way I decided to include it.

A couple of hours into our drive we crossed Bighorn Lake and entered BigHorn National Forest. As you near the area it’s pretty much a desert wasteland with a lot of beige. There are some cool looking canyons that remind you of the Grand Canyon, but not nearly as large or deep.

We came in from the Northwest corner of the forest and made our way up a series of steep switchbacks climbing several thousand feet in elevation. Rotchana isn’t a big fan of “snake” roads, but the surrounding scenery distracted her long enough to get us to the top.

Once we were at the top of the grade it opened up into an alpine meadow covered in green grasses and wild flowers. It made for a good excuse to get out and stretch, and to take some photos. We never did see any Bighorn Sheep, though.

When we made our way out of the East side of the forest the highway took us through a small town named Dayton. We stopped for gas and I noticed a sign across the street for jerky. Jerky has been one of our standard snacks on our road trips, but it’s mainly been the national brand stuff you get at convenience stores. I wanted to try something a bit different like Elk or Bison jerky. Rotchana wanted nothing to do with it so Victoria and I polished off a $10 bag in about an hour. Definitely worth stopping to get if you ever find yourself in Dayton.

A couple of hours later we made it to Devil’s Tower. I think Rotchana thought it would be some boring rock, but when she saw it for the first time she thought it was the coolest thing she’d seen. Side note, Rotchana likes alien movies so we watched “Close Encounters of the Third Kind” when we were back home. She had no idea that Devil’s Tower was part of the movie.

As we made our way up the park road to the Visitor’s Center there was an area to the side of the road filled with Prairie Dogs. The girls had fun watching them pop in and out of their tunnels. Having people around didn’t seem to bother them much.

Once we got to the Visitor’s Center, which is closed due to Covid-19, I convinced the girls to walk the 1.5 mile trail that circles Devil’s Tower. It was actually a pretty easy walk and only took us about 40 minutes to complete. We would have taken a little longer, but Sheila had to stay in the car since dogs aren’t allowed on the trails.

Dozens of photos later we hit the highway headed to Rapid City, SD for the night. I knew Rotchana was excited to see Mount Rushmore so I took a small detour and cut through the Black Hills so I could surprise her that evening. I figured we had enough time to get there before the sun went down.

When we arrived at Mount Rushmore there was a pretty good sized crowd, but nothing crazy. Once again, Rotchana was in awe of what she was seeing and couldn’t believe that she was there. She found out quickly that photos don’t do the place justice.

We only stayed about an hour and headed to our hotel and a bite to eat. Another long day of driving was behind us and it was going to be nice to be able to sleep in the next morning. Or so I thought.