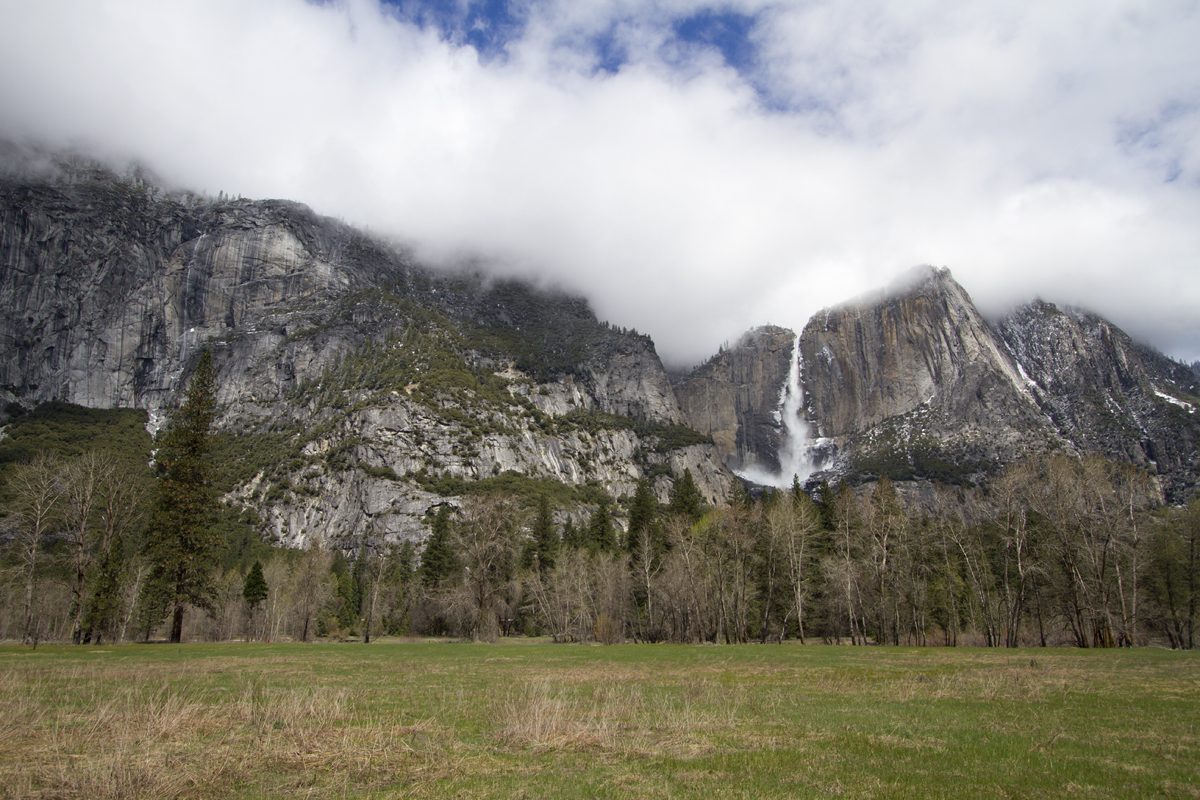 For the past few years I’ve wanted to drive up to Yosemite National Park when there is snow on the ground. I’ve been to Yosemite many times, but never when there is snow in the Valley. There are a couple of reasons why I haven’t made it up there to see the snow. One problem is the fact that snow doesn’t stay long in the Valley when it does happen, and another is that the roads usually require chains leading into the park if you go up during the storm. I don’t have chains and the thought of being “in” the storm isn’t very appealing, as well.

This past week there was a small storm that dusted the Valley floor a couple of night’s in a row so I thought I’d take a run up early enough to catch some of the snow on the ground. By the time I arrived there wasn’t much snow left on the ground except for areas along the valley walls that were in shade. The peaks and many of the taller trees were still covered, though, and it looked incredible.

The weather started out being pretty nice as it was in the mid 40’s with sun and a few clouds up over the cliffs. I decided to hike the 4 mile roundtrip trail out to Mirror Lake to see if there was any water. I’d hiked out there a couple of years ago during the summer and found out that it was empty upon arrival. I didn’t realize at the time that it was seasonal so I was disappointed. This time there was water, but not as much as I had thought there might be. There’s been a lot of snow this year so I expected more, but maybe the bulk of the snow hasn’t melted and runoff later in the spring will fill it up some more. The lake still had the mirror effect of the towering cliffs so all was not lost. No snow, either.

Just as I left the lake I noticed it was starting to snow/rain a little. On the walk up to the lake I got a bit of sprinkling from the snow dripping off the tops of the trees, but this was turning out to be a pretty good downpour. I wasn’t particularly prepared for the bad weather since the forecast was for sunny skies. I soldiered on, though, and made it back to the car a little wet, but not completely soaked. As soon as I returned to the car it started to clear up again. Murphy’s law, I guess.

I drove around the loop in the Valley for a while stopping to take photos or watch the dozens of deer out getting a bite to eat in the meadows. The rain started to become more consistent so I headed back home after a nice day in the park.

I still want to go back someday when there’s a lot of snow, though. I guess I’ll have to go up when there’s a storm, stay the night, and be ready to go out in the elements early in the morning to see it. I’m thinking it will be worth the effort.