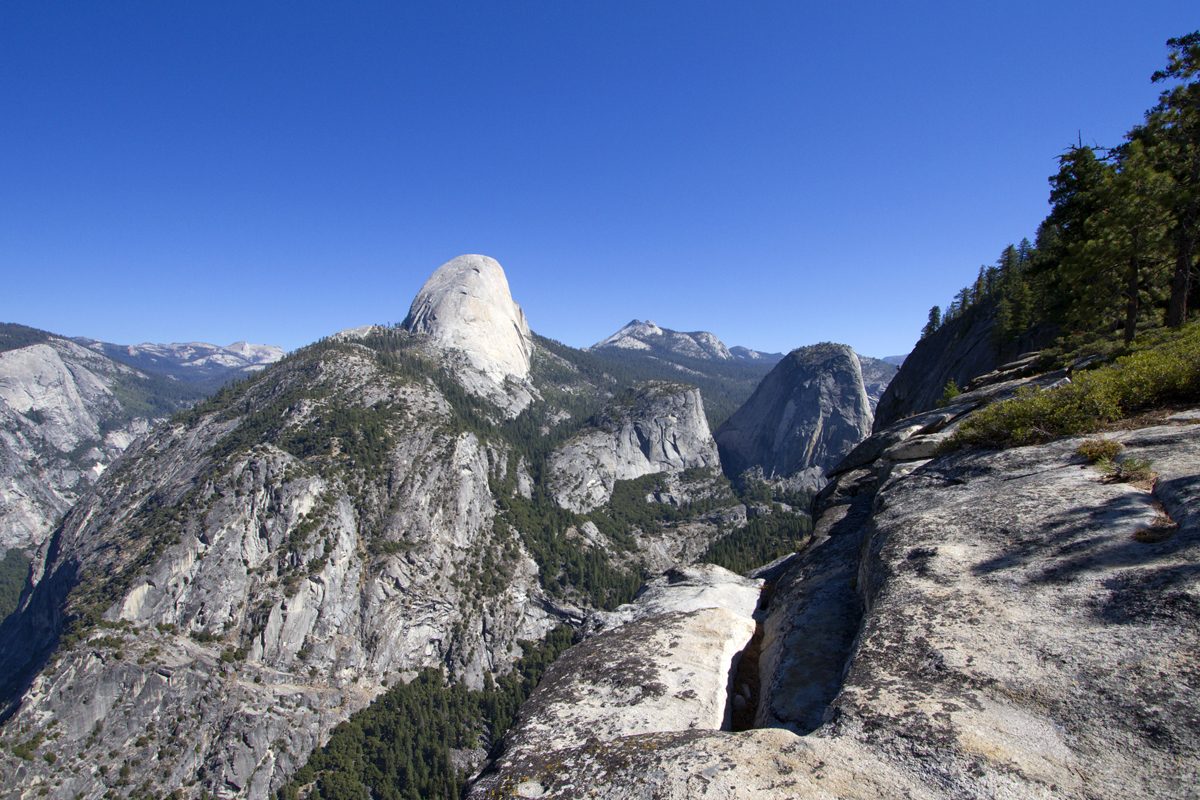 This past Saturday I met up with a high school friend of mine at Yosemite National Park for a hike on the Panorama Trail. I left the house at the ungodly time of 3:45am to make the 3 hour drive so we could meet at 7:00am. I arrived about 6:30am just as the sun was starting to come up from behind the valley. We were meeting at the Tunnel View area so I had a nice vantage point to see the sunrise. Unfortunately, it was pretty subdued and didn’t turn out to be much. It was nice being out there so early with nobody else around, though. Tim showed up a bit later and we drove to the other end of the valley to park my car. We then turned around and went back up to Glacier Point to start the hike. The parking lot down in the valley is literally a stone’s toss down the cliff from Glacier Point, but by car it’s about a 26 mile drive. By foot it’s about 8 miles. That was how we were planning on spending the next 7 hours.

I think the temperature was in the 50’s when we first started out. By the middle of the day it was supposed to be in the mid 80’s. There was hardly a breeze and not a single cloud in the sky. Pretty nice hiking conditions. The trail is pretty much downhill all the way except for about 2 1/2 miles that is pretty much an uphill stretch. One reason we chose this route was because of the length, but also because it passes 3 pretty nice waterfalls, and as mentioned before, pretty much downhill. Overall I believe the trail drops about 3,000 feet in elevation start to finish.

The first two miles had us walking down a gentle slope with a view of Yosemite Valley and Half Dome. There had been a fire a few years back so a lot of the taller trees were charred, but there was a lot of vegetation that had filled in. Lots of green and some yellow sprinkled in now and then created a pretty nice scene. We didn’t see much in the way of wildlife, but we did see quite a few lizards.

After about 2 hours of making our way down the hill we made it to Illilouette Falls. We could hear it for a while, but didn’t see it until we were right on top of it. From where we were on the trail we could look out across the creek to see the falls on the opposite side tumbling down into the creek below us. I think the falls are around 350 feet high or so. There was a pretty good flow of water, but nothing like what you’d probably find in the spring. The fact that there was water at all is pretty impressive.

We took a few photos and decided to continue on to the next waterfall named Nevada Falls. It was about 2 miles or so away and this was the uphill portion of our hike. The trail meandered in and out of the trees with a few spots popping out right near the cliff’s edge overlooking Yosemite Valley. We stopped at one spot that sat high above the valley floor with views of Half Dome and Yosemite Falls at the far end of the valley. It was literally a drop of a couple thousand feet or more to the bottom so we had to watch our step. We both took turns slipping on some loose sand on our hike, but never near a dropoff that put us in danger. The view was awesome and we could have sat there all day. Funny enough, we had pretty good cell phone coverage so we each emailed a photo of our location to friends and family just to say “Hey, look where I’m at!”.

As we approached the Nevada Falls we were coming down a few switchbacks in the trees when all of a sudden we heard some kind of commotion behind us. My first thought was that there was some kind of rock slide. As we both turned around we saw a very tall tree falling over and snapping in half. It made a huge crackling noise similar to thunder. A lot of dirt and branches flew around for a minute and then it was all quiet again. We have no idea why the tree fell, but we were just glad we’d made it through the area when we did. We also determined that a tree falling in the forest does make a noise, even if you’re not there to hear it. We’ll just assume that’s the case.

When we approached the top of Nevada Falls we started seeing a lot more people. It appears that hiking to the top of the Nevada Falls is a popular round trip hike from the valley floor. There were several people sitting on the rocks next to the water having lunch and sunbathing. There was a pretty good amount of water going through the area, but nothing compared to the spring. You could tell by the way the rocks were carved out and by the stains on the granite that during the peek season this area is a huge torrent of water. The falls are about 600 feet tall, but from the top you can’t see the bottom. The area here provided more incredible views of Half Dome and Liberty Cap.

While we sat up near the top of the falls we both had a small snack. A squirrel came by looking for a handout and was rewarded with an apple core someone else had left behind, as well as a small piece of a Ritz cracker. Tim took a photo of the squirrel eating the cracker, but hopefully the park rangers won’t come across it. I joked at the time that it was probably a $500 fine for feeding the animals. We later found out that it’s $5,000! Yikes!

We left the top of the falls and started our descent down the trail towards Vernal Falls. This part of the trail was a never ending staircase made out of small stones and tree roots that literally took us down the face of the cliff that the falls go down on. Going up probably isn’t so much fun, but going down isn’t much of a bargain, either. We finally made it down the staircase to a point where we could walk out to the creek and look at the Nevada Falls in it’s entirety. It was still a pretty good amount of water, but you could tell by the coloration of the granite that it was still very small compared to it’s full force in the spring.

About two miles or less later we came across an area where the runoff from Nevada Falls collects into a large pool before exiting on the other end as Vernal Falls and falling another 300 or so feet. Leading up to the pool is a few hundred yards of smooth granite that the water spills over on it’s way down the hill. The water was only a few inches deep, but was running pretty fast. Several small kids were playing around the water without realizing how quickly things could get scary. We actually saw a couple of them sitting in the water when all of a sudden they broke traction and started to hydroplane down the slope towards the pool. While I think they were more likely to be more scared than hurt, you never know. Fortunately they didn’t get all the way to the large pool of water below to find out. It just shows you have to be careful even when the conditions were as tame as they were.

We finally made it to our last waterfall and looked below to see where our trail headed next. At the top of Vernal Falls all you can really see is the canyon below with what looks like stairs carved into the cliffside leading you down to the bottom. During the spring the spray from the falls is enough to get you completely drenched, but we were spared that. This is why this part of the trail is called Misty Trail. After what seemed like another never ending series of stone steps we made it to the bottom of the falls. There was a nice rainbow formed at the foot of the falls. Many people were hanging out on the rocks near the pool at the bottom taking in the cool spray.

We only had about 1 mile or so left to get back to the car once we left the falls, but it was probably the hardest mile we’d had. The trail was downhill, but it no longer consisted of steps or soft dirt. It was a paved walkway that put a lot of stress on your knees with each step. I’m sure part of it can be attributed to having just hiked about 7 miles through hilly terrain and being a bit tired, and more likely it’s just the simple fact of getting older, but we had to stop every few hundred yards or so to let our knees recover. The entire hike leading up to that point seemed pretty easy. I never felt out of breath despite the elevation and the long uphill portion of the hike, and my legs actually felt pretty good up to that point. There was something about that continuous downslope that tried to do us in.

Around 4:00pm we made it back to the car. The last couple hundred yards were flat and my knees felt a lot better. We were both covered in dirt and pretty hungry so we decided to grab a bite to eat before driving back up to Glacier Point to get Tim’s car.

After eating what we think were hamburgers we got back up to Glacier Point and said our goodbyes. Tim needed to get back to San Diego and I had a few hours drive myself that awaited me. On my way out of the park I passed by the Tunnel View area again and decided to hang out to see what kind of sunset I’d get. I waited about an hour to find out that the sunset was even less spectacular than the sunrise was earlier in the day. I can definitely say that despite the sunrise and sunset being less than special, everything in between was great. I had a great time getting to visit with Tim and we both got to experience some great scenery. Can’t ask for much more than that.