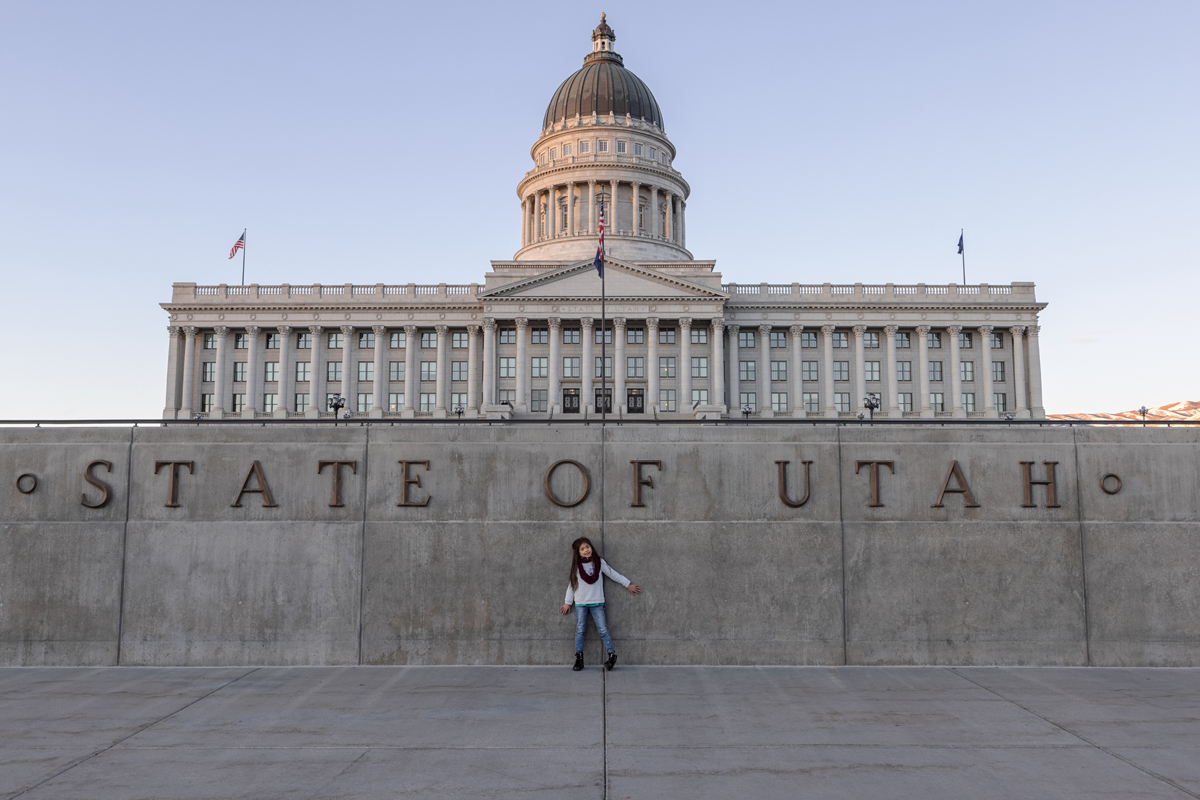 Last weekend we headed out to the Salt Lake City area in Utah. Prior to the weekend I had told the girls were going to Salt Lake City to explore the city. They’ve only been to Southern Utah so they were excited to come see something new. I didn’t share that I had scheduled some activities for Sunday.

We left home around 8:00am on Saturday and made good time getting to Salt Lake City around 1:00pm. We headed straight to the hotel to check in and then decided to head out to downtown for a little exploring.

When we got into the city we found some parking across from the Salt Lake Temple, but realized quickly that the Temple Square area was under heavy construction so there was a lot of scaffolding and chain link fences. We decided to take a quick walk through the area that was accessible, but there wasn’t much so it ended up being a 20 minutes stop.

We then headed up to the Capitol overlooking the city. Right next to where we parked there was a small trail that went down into a little canyon that had a small park with a creek running through it and some small temples. We walked around the area for a little bit, but decided to go back up towards the Capitol and get out of the shade. Temps were in the 30’s so getting back into the sun was welcome.

After a few photos at the Capitol we headed back to the hotel for an early night in. I had told the girls we had to leave the hotel by 9:00am the next morning, but they had no idea why.

The next morning everyone got up in time and we actually were in the car and moving by 9:00am. That’s really rare on my days off to be on the way at the time we selected. We drove for about an hour and 20 minutes up past Park City to a ranch in one of the canyons in the area. When we pulled into the parking area there were some snowmobilers returning from a ride in the canyon so the girls thought that’s what we were there for.

We took Shiela for a walk in the snow before having to get ready for our adventure. I had made reservations for the 3 of us to go dog sledding. The girls were excited, albeit a little nervous. I think they’ve watched too many dog sledding movies that had accidents in them.

We got to meet the dogs and pet them for about 15 minutes before we piled into the sled and took off on our ride. The ride lasted about an hour and went up and down some small hills here and there letting us pick the up the speed and get the girls excited. They had a great time and I’m glad I had set it up.

After our dog sledding ride we went into Deer Valley for lunch. The Sundance Film Festival was going on over the weekend, but there wasn’t much in the way of crowds. We were able to find a spot to park on Main Street and didn’t have to wait for a table for lunch.

When lunch was over we went over to the Olympic Park to show the girls the jumping and bobsledding facilities. I don’t think they really got it until we were heading back down and saw a group of skiers jumping off of the aerial ramps. More than likely it was some of the skiers that hope to compete in the next Olympics.

On our way out of Park City we stopped at a place called Woodward Park City. It’s a big sports complex set up for skiing, snowboarding, skateboarding and tubing. We’ve talked about taking Victoria tubing the last couple of winters so I thought this would be a good place to do it.

I thought it would just be Victoria and I tubing, but Rotchana got her courage up and decided to join us. We each grabbed a tube and took the 10 minute ride up the slope on the automated carpet. The slide down was probably a quarter mile or so, but only took about 30 seconds. Victoria loved it, but Rotchana screemed the entire time and probably had her eyes open for about 5 seconds of the entire ride. Surprisingly, she went for a second run before making an excuse to go back to the car to check on Sheila.

Victoria and I made 3 more runs before our time ran out. It was a lot of fun and finished off a busy day. We had thought about going to Top Golf in the evening, but ended up going back to the hotel and crashing.

The next morning we slept in and made the drive back home. We made good time and ended up going grocery shopping and doing some laundry. We got a lot done in 3 days, but hopefully we can take more time and spread it out a little bit next time.