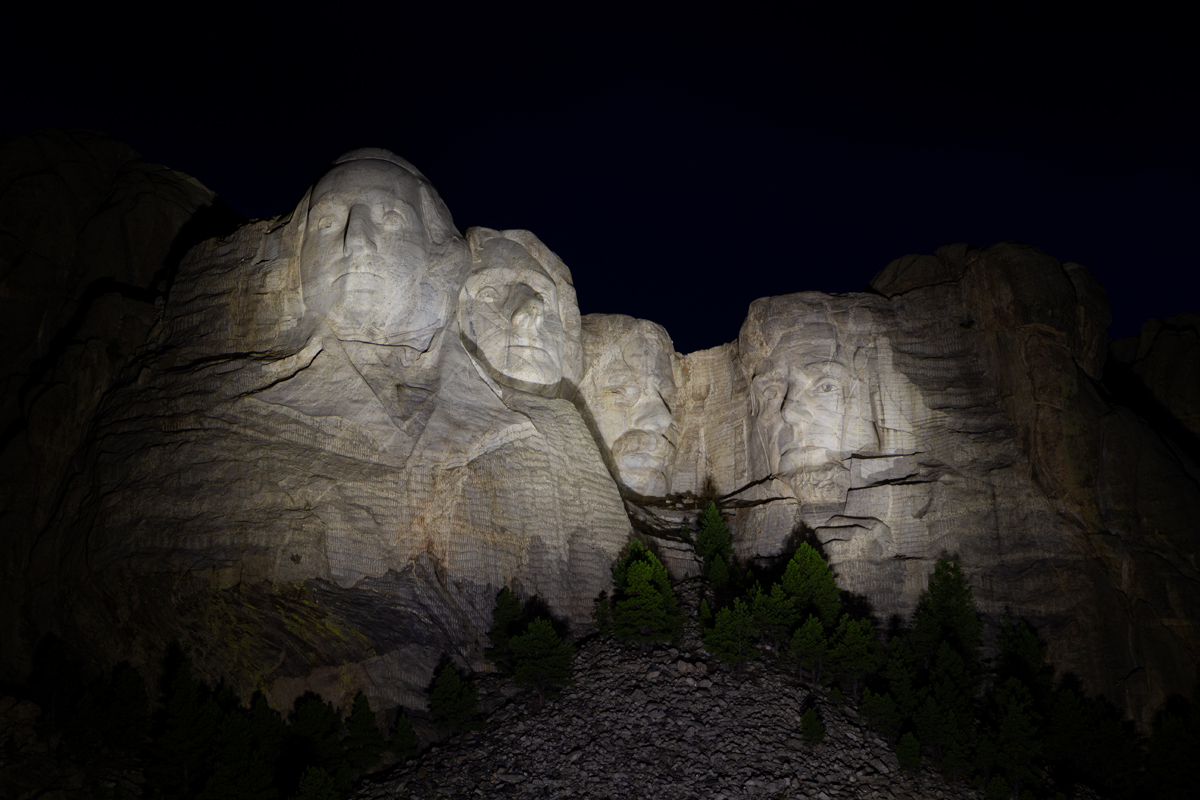 As stated in the previous entry, day 3 would be spent in the same general area without a long drive added in so sleeping in would be a nice option. Well, that went out the window when I decided to get up and head out to Mount Rushmore for sunrise. The monument opens at 5:00am and sunrise was 5:25am so I set my alarm and left the hotel at 4:30am. The girls were not having any of it so I left them sleeping knowing that I’d probably return before they woke up.

I was the first car to arrive and the park ranger was unlocking the gate as I pulled up. Nice bonus, no parking fees for the first couple of hours. The other bonus, nobody showed up for a good 30 minutes so I had the place all to myself.

The sun was already peaking over the hills when I pulled in, but didn’t fully rise until 5:25am so I took a few photos at different angles trying to guess what might come out the best. The monument itself faces directly East so I knew the sun would light them up well, but I wasn’t sure if the sky would have any interest. The night before it was a flat sky facing into the sun so pretty boring.

As the sun came out I could see the clouds to the East lighting up a nice pink/orange. There were clouds behind the monument, but they never really caught the colors, but at least provided a nice contrast to the monument. The monument lit up with a lot of warm, pinkish/orangish hues. Definitely worth getting up for and seeing it in a different light.

I spent about an hour at the monument before heading back to the hotel. As expected, I pulled in just before 7:00am and the girls were both asleep. I climbed back into bed and slept for a couple of hours as a reward for getting up early.

Once the girls were up we headed back up to Mount Rushmore. By now the crowds were in full force, but we stayed for a couple of hours and walked the trail that leads up to the bottom of the rock pile at the base of the monument. The girls got their selfies in and had a good time despite the 250 steps included in the hike.

We then took off to go drive through the Black Hills and see what Custer’s State Park had to offer. It was a pretty area, but no wildlife. After a couple of hours we headed back to the hotel to let Victoria swim in the pool.

We went out to dinner at Ruby Tuesday’s, one of Rotchana’s favorites, and then headed back up to Mount Rushmore for sunset. We arrived around 8:30pm and the crowds had quieted down so it wasn’t so hectic. Our plan was to hang out until the sun went down so we could see the monument lit up.

Around 9:00pm the park rangers gathered at the entry area for the monument and invited any current or previous military to join them for a flag ceremony. There were probably several hundred people gathered around and they all gave a nice standing ovation for the military members that lasted about 5 minutes. They then lowered the flag and had one of them fold it for the night. Someone started singing the National Anthem and by the second verse the entire crowd was singing along. With all that’s going on right now it was kind of nice just to see a bunch of random tourists from all walks of life doing something together that made the evening that much more enjoyable.

We got our sunset shots and decided to head back to the hotel and get rested up for the long drive the next day. Rotchana got to see Mount Rushmore and it didn’t disappoint.