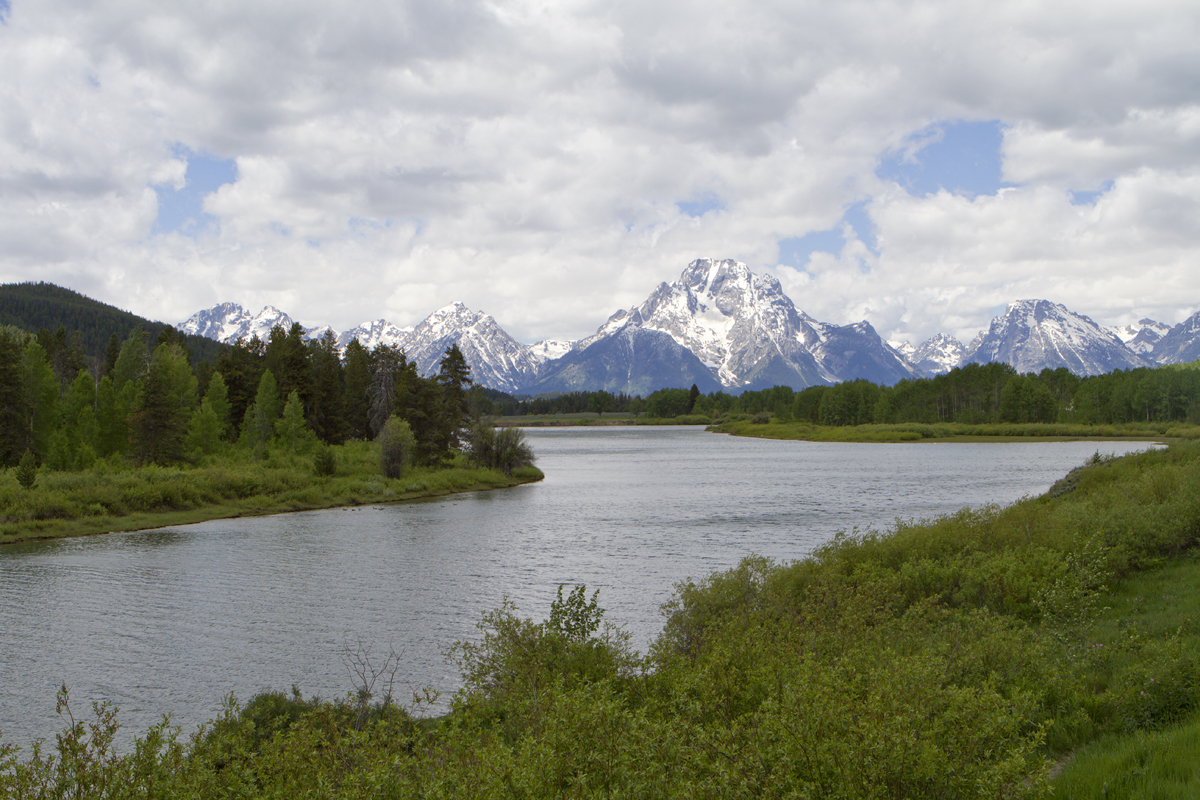 After a pretty good night’s sleep we left the hotel around 10:00am and made our way to Jackson. We drove through town looking at all of the buildings and noticed how crowded it was. I guess people are over worrying about Covid.

We stopped for a brief moment to take some photos of some archways built from antlers at one of the town squares before heading up the highway to do more sightseeing. Had there not been so many people walking around we might have walked around more, but maybe another time.

Our first stop along the highway was at Mormon Row and the famous Moulton Barn. It’s another popular photography hot spot, but at least there weren’t any people around so it was nice to take time to look around and take some photos.

We stopped briefly at Oxbow Bend again since it was early in the day. The sun was in a better spot than the day before so I think the photos came out a little better. I think this spot is probably best at sunrise as it might not be as windy helping with reflections, and the rising sun probably lights the Tetons up better. Maybe next time I’ll get up at 4:00am to find out.

We drove for about an hour and made it into the Southern Entrance to Yellowstone NP. We passed quite a few lakes and crossed the Continental Divide at about 8,000 feet above sea level.

I decided to stop at the Old Faithful Lodge to see if they were serving food, and also to top off the fuel tank in case we ended up driving more than planned. We parked and walked towards the viewing area for Old Faithful and found huge crowds gathered around the geyser. As luck would have it, Old Faithful erupted just as we walked up. We let the crowds have the closest vantage points and stayed back by the lodge. We weren’t planning on waiting for an eruption, but since it happened we decided to watch.

Rotchana asked to go back to the Grand Prismatic Spring so we headed over to take some photos. Unfortunately, the wind was blowing directly across the spring back into us so all we saw was steam and little bit of the orange bacteria in front of the spring. Next time we’ll go up to the Fairy Falls trail and walk up the hill behind the spring to see the view from there.

We then drove around the Firehole River Loop. I’d never taken the road before so it was a nice surprise. The entire road follows the Firehole River and has some waterfalls and cool canyon scenery. At the end of the loop we were greeted by a couple of large bison.

We decided to continue north up to Gibbon Falls before calling it a day. The drive back to the hotel took about 3 1/2 hours without many stops so we definitely saw quite a bit more than originally planned.

Over a 54 hour period we spent about 34 hours driving in total. The girls enjoyed seeing all the animals and scenery, and Sheila did a great job in the car so it was a successful trip. Rotchana wants to drive to Mt. Rushmore next month so I guess she didn’t get enough time in the car!