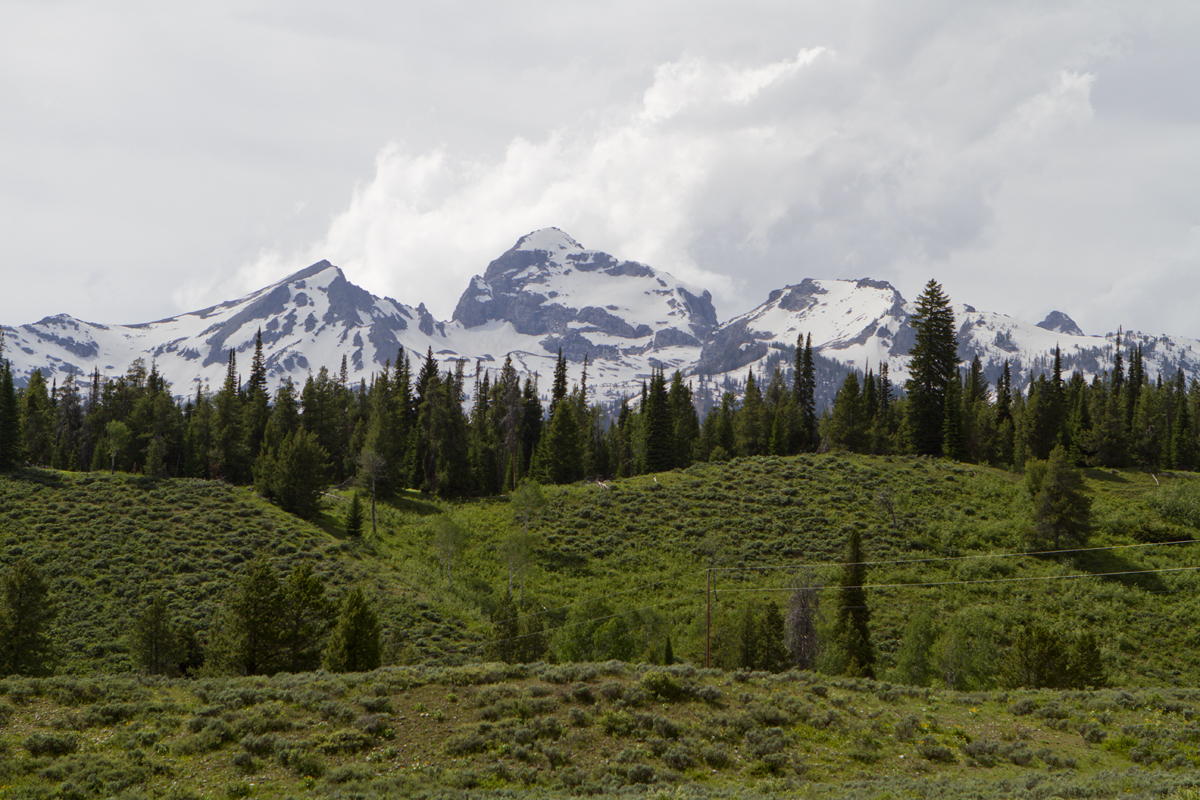 It’s been a while since I’ve had a 3 day weekend so we decided to head out to Grand Teton National Park and Yellowstone for a few days of sightseeing. Our plan was to leave Saturday morning, check into our hotel in Victor, and spend the next couple of days driving through the parks to see what we could find.

As planned, we left Nampa about 8:30am in the middle of a pretty good downpour. The forecast in Wyoming looked good for the weekend so getting away from the rain was a plus. The drive to Victor was uneventful with the girls sleeping most of the way. Sheila was a trooper and made herself comfortable on the back seat. Jaidee isn’t a traveler so we left her at home with food, water and peace & quiet.

We checked into our hotel around 2:00pm, dropped off our bags and promptly headed out to explore. Victor is about 20 minutes or so from Jackson so we headed there to grab a quick bite to eat, and then backtracked to Moose Wilson Road that heads up into Grand Teton National Park.

Moose Wilson Road is known for it’s wildlife, but all we saw was really pretty scenery. It was the middle of the day and the wind was blowing pretty good so we didn’t expect much. We knew that coming back in the evening might be more fruitful so we continued into the park stopping at various places to take photos and take a break from the car.

We stopped at several turnouts along the highway to take photos. It was obvious that afternoons were not the best time of day to photograph the Tetons since you’re facing into the sun, but it was still pretty and the girls had fun posing.

We popped in at Schwabacher Landing, which is a well-known spot for photography with the Tetons in the background. Beavers have built several dams creating small ponds along the river so it’s picturesque. On a calm day you get nice reflections, but with the wind it wasn’t in the cards. Still, very pretty.

Making our way down the highway we passed through an area named Antelope Flats. There were several hundred bison spread out over the fields, with a few pretty close to the road. Even though you see bison quite often, it never gets old.

Oxbow Bend was our next destination, and again, the sun was not in the right spot. It was still nice to look at the Snake River with the Tetons in the background, though.

By this time it was starting to get late in the afternoon so we looped around to take the park roads by some of the lakes to make our way back to Moose Wilson Road. Lots of pretty spots with the lakes and river.

As we came around a bend in the road I saw cars parked up ahead. That’s a sure sign that wildlife is close by. As we got closer to the stopped cars we realized that there were rangers directing traffic and several dozen cars stopped on the shoulder. There were areas coned off so stopping for us wasn’t going to happen so I slowly drove past cars trying to figure out what they were looking at.

After passing about 50 cars I saw all the photographers with their huge 700mm and 1000mm lenses pointing at the hillside. They were all trying to get photos of a grizzly bear and her cubs. I had to keep moving, though, and eventually reached the end of the parked cars and pulled over. Word was that the mother bear was headed our way along the hillside.

Sure enough, the mama grizzly appeared at the top of a hill and following her were 3 cubs. We lucked out having them pass pretty much past where we had parked. We had gotten out of the car and crossed to the opposite side of the road to take some photos while the park rangers kept traffic moving and keeping the photographers at bay.

It was pretty cool seeing the bears. They seemed to understand what was going on and paid no attention to all the humans scrambling to see them. We were about 100 yards away at our closest position so we never felt any danger, but had we run into them walking along a trail I’m sure we’d feel different.

After all that excitement we hopped back into the car and headed towards the hotel via Moose Wilson Road. At one point there’s a turnout that provides a nice view of the river and a meadow down below the road. We parked the car and hopped out to take a look and saw that a moose was hanging out at the far end having his meal for the night.

We took a few photos and then decided to head to the hotel because we’d been in the car nearly 13 hours at this point. Despite the long time in the car we had a good time driving around. The girls were excited to see the wildlife and the scenery. Day 2 would hopefully be just as eventful.