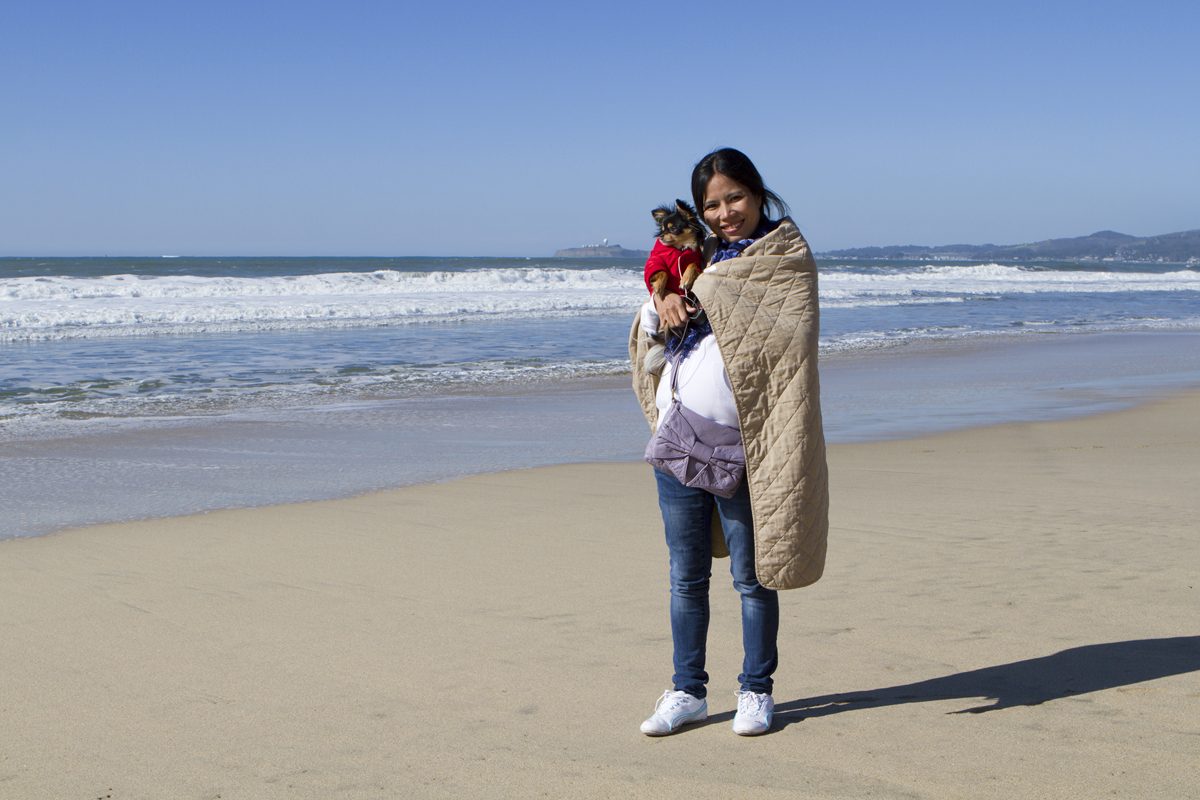 It seems as though my days off lately have been filled with doctor appointments and the occasional real estate photo work, so having a free day yesterday was a nice change of pace.

Our day started off with sleeping in a bit. I remember a time that waking up at 9:00am was considered early, but now it seems to be a luxury. It’s such a nice feeling when an alarm clock isn’t blaring in your ear. We took our time eating some breakfast, and then we decided to go to the beach. Sunshine was in the forecast and we thought it would be nice to take Jaidee with us. The beach just seemed like a good idea. If anything we’d get a break from the gray, foggy valley we’d been dealing with.

After driving for about 1 1/2 hours we arrived in Half Moon Bay. We popped into Round Table Pizza for a quick lunch before heading to the beach. Rotchana has a pretty strict eating schedule due to her gestational diabetes so the beach could wait. Once we arrived at the beach the sun was out, but there was a pretty cold wind blowing. Fortunately, when we took the path down to the beach away from the bluffs the wind wasn’t so strong. As long as we didn’t stand in one spot the cold didn’t bother us too much.

One of the nice things about the beach we went to is that dogs are allowed. We took Jaidee off her leash and let her do her thing. She’s still intimidated by anything new so she pretty much stayed by our sides. Every once in a while I’d sneak down the beach a little without her and once she figured out she wasn’t by our side she sprinted back to us. She got a lot more exercise than she’s used to.

After about an hour of wandering in the sand we decided to head back to the car. I figured since we were close enough to San Francisco we might as well head up there for dinner. Traffic was pretty heavy due to the nice weather and being on a weekend, but we made it up in short time. I drove all over the city so Rotchana could see the different neighborhoods. Before going down to Union Square for dinner we headed up to Twin Peaks to check out the view. Since it was a clear day we were able to see all across the Bay out to the ocean.

We parked down near Union Square and walked to a place called “Bangkok Noodles” for dinner. Rotchana says the food is authentic and one of the better Thai restaurants we’d been to. I’m glad she’s been able to enjoy some of the foods she’s accustomed to. I imagine it’s one of the harder adjustments she’s had to make so far since coming to the US.

We didn’t wander around too much after dinner because Jaidee was waiting for us in the car. We had a good time and were thankful for a day together without it including a visit to the doctor.