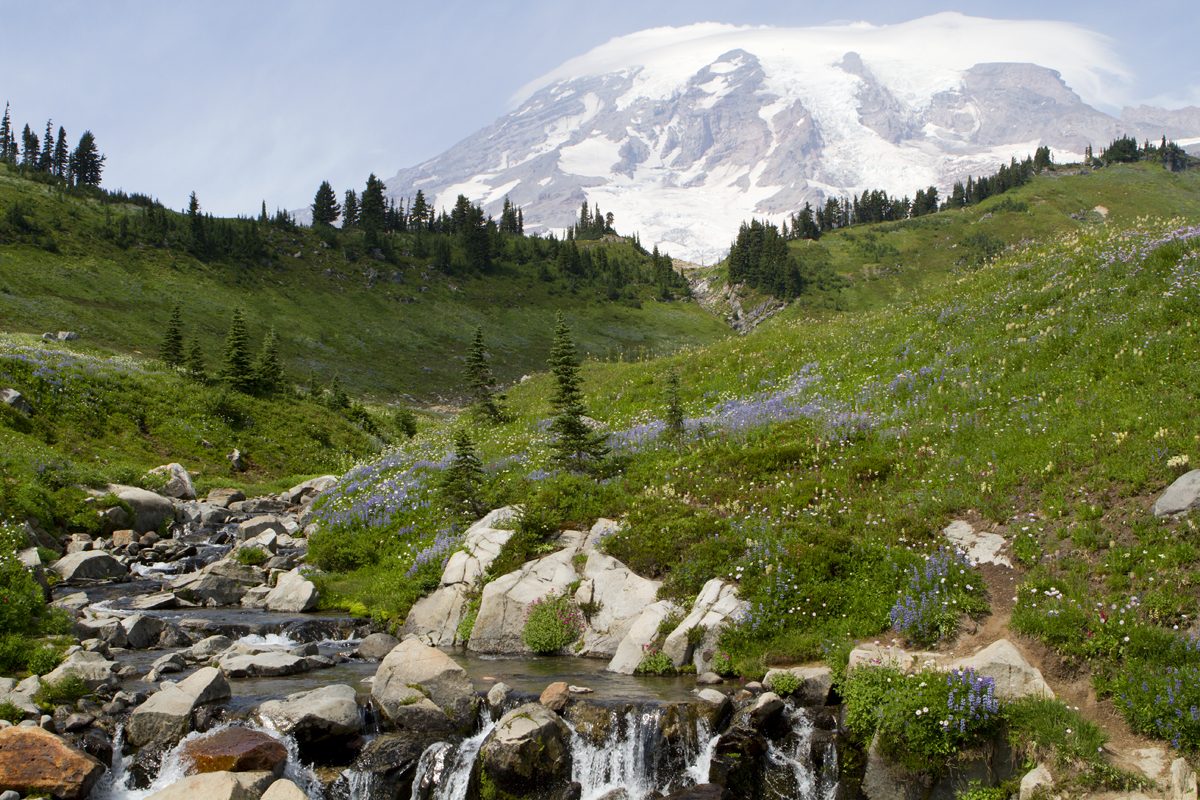 Early Saturday I drove from Roseville, Ca up to a hotel in Washington near Mt. St. Helens. Since I arrived much earlier than expected I drove over to the Mt. St. Helens observation point and took some photos. I’d never been before so I wanted to check it out. One day I’ll have to come back and spend more time hiking the trails. Perhaps I’ll get to climb to the top of the crater some day.

On Sunday morning Tim, along with his son Danny and daughter Melissa, met me at my hotel for our hike on Mt. Rainier. They arrived at 8:00am and before heading up to the park we stopped in town at a small cafe for breakfast. I don’t think anyone objected to getting a stomach full of good food before going on a long hike.

We arrived at Paradise Visitor Center a little after 10:00am and began our 4 mile hike up the Skyline and Golden Gate Trails. There were quite a few elevation changes, but the first half mile was probably the steepest part of the entire hike. It was good to know that it wasn’t just Tim and I breathing hard. The kids were doing their fair share of huffing and puffing, too.

Once we got about 3/4ths of a mile from the visitor center the paved path broke away to dirt and gravel. The trail continued up the mountain, but it seemed to be a more gradual climb. Once we got up a bit higher we had to cross a few patches of snow that remained from last winter, but they were short and simple.

We eventually made it up to Panorama Point where we stopped to take some photos and eat some bananas. The view was really nice with the green grasses and wild flowers below us, and the rock and snow covered mountain above us. We had a nice view of the glaciers on the mountain, too.

As we made it back down the mountain we ran into an unexpected visitor. We were told by a few hikers heading the opposite direction that there was a bear somewhere up ahead. The trail we were on was a big loop and would eventually take us back to the visitor center, but we decided to head down a different trail that was steeper, but would take us on a more scenic route. Turns out that was the way we needed to go to see the bear.

The black bear was up on a hillside above the trail eating flowers and whatever else bears eat. It was several hundred feet away from the trail so those that walked by felt comfortable enough to take the time to stop and take some photos. The bear didn’t seem to care that anyone was around. It probably knew it could outrun any of us and was content with his vegetarian snack so it just went about it’s business.

After taking some photos of the bear we continued on down the path until we got to Myrtle Falls. The falls are a short distance up from the visitor center so there was a pretty big group of people taking photos. It was worth the wait to get a shot, though. If you see a photo of Mt. Rainier with a waterfall in the foreground it’s probably Myrtle Falls.

We finished our hike shortly after visiting the falls and decided to get a bite to eat at the visitor center. Nothing like a $9 sandwich after a good hike!

We made a quick stop heading out of the park to take some photos of a waterfall named Narada Falls. There wasn’t a lot of water coming down the falls, but it was still worth the hike down and then back up the hill.

We eventually made it back to Morton where we said our goodbyes. Tim and the kids headed back home and I hit the sack to prepare for my 12 hour drive back home on Monday. I had a great time and despite all the driving I would do it again this weekend if I had the 3 days off like everyone else.