Day at the Beach 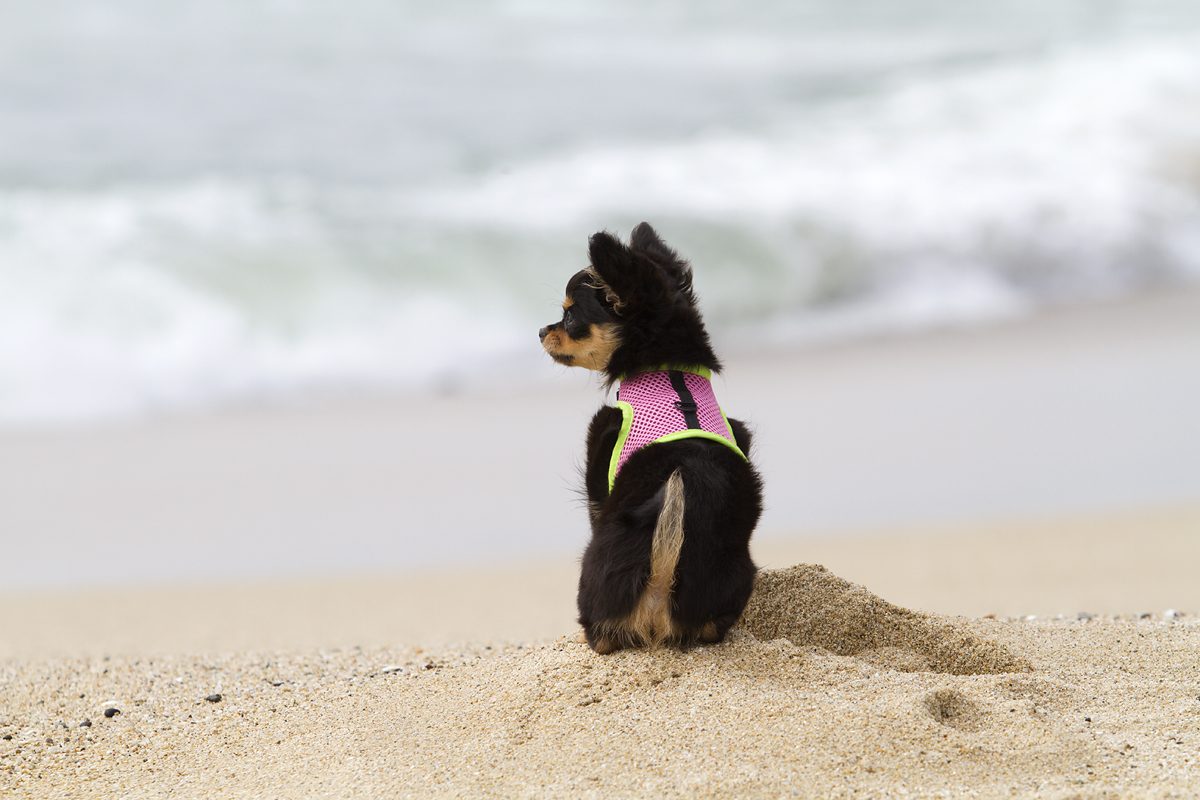 Today I decided to take Jaidee on a road trip along the coast to see how she’d like the beach. There’s a beach in Half Moon Bay that allows dogs so that’s where we headed.

It’s been up in the 90’s the last few days here, but a storm is supposed to come in tomorrow so it was forecast to be much cooler today. I wasn’t sure what the weather along the coast would be like, but it turned out to be a perfect day. Temps were in the mid 60’s with only a slight breeze. I was overdressed, but I guess it was better to be safe than sorry.

We arrived at the beach around 1:30 in the afternoon and we found a spot to hang out a hundred yards or so down from the trail. Jaidee is still getting used to a leash so I carried her from the car just to make the trip a little easier. Once we got settled in I put her on the leash to wander on her own, but that didn’t last long. She spent all her time getting tangled up or trying to chew on the line so I ended up taking her off the leash. There was nobody else around for as far as I could see and I figured I could catch her if she ran off. As it turned out, she pretty much stayed next to me the whole time and didn’t seem interested in exploring on her own.

I wanted to get some photos of her, but she stayed at my feet so I had to trick her. I found a piece of balsa wood that was small enough for her to handle and tossed it away from us. She figured out the game and started to go fetch it. While she went to get it I ran in the opposite direction to get some space between us and then I tried to take some photos of her coming back to me. She’s faster than I expected, which made it difficult to catch her at times, but I was eventually able to get a few photos.

Jaidee had a great time playing in the sand. Her nose was pretty much encrusted with sand the entire time, but it didn’t seem to bother her. After an hour or so a man showed up nearby that was playing with a skimboard. Jaidee took an interest and sat to watch him for a good 20 minutes. After a couple of hours she finally showed signs of getting tired so I decided it was probably time to leave.

Rather than head straight home I decided to head down the coast to Santa Cruz and then back up to Half Moon Bay. I enjoy driving along the coast and I thought I’d hang around long enough to see if there would be a decent sunset. It turned out to be short and nothing too special, but the color was pretty good.

About halfway down to Santa Cruz I saw a couple of whales not too far from shore so I pulled over to try and get a photo of them. As is the case most times they only popped back up a few more times, and not nearly as visible as they had been when I saw them while driving.

Jaidee slept the entire drive home, but found a second wind when we got home. She ran around the apartment like a racehorse doing laps around the furniture for about 10 minutes until collapsing in her bed. Based on how today went I’d guess she’ll be going back to the beach many times in the future.