Not So Wild Adventures 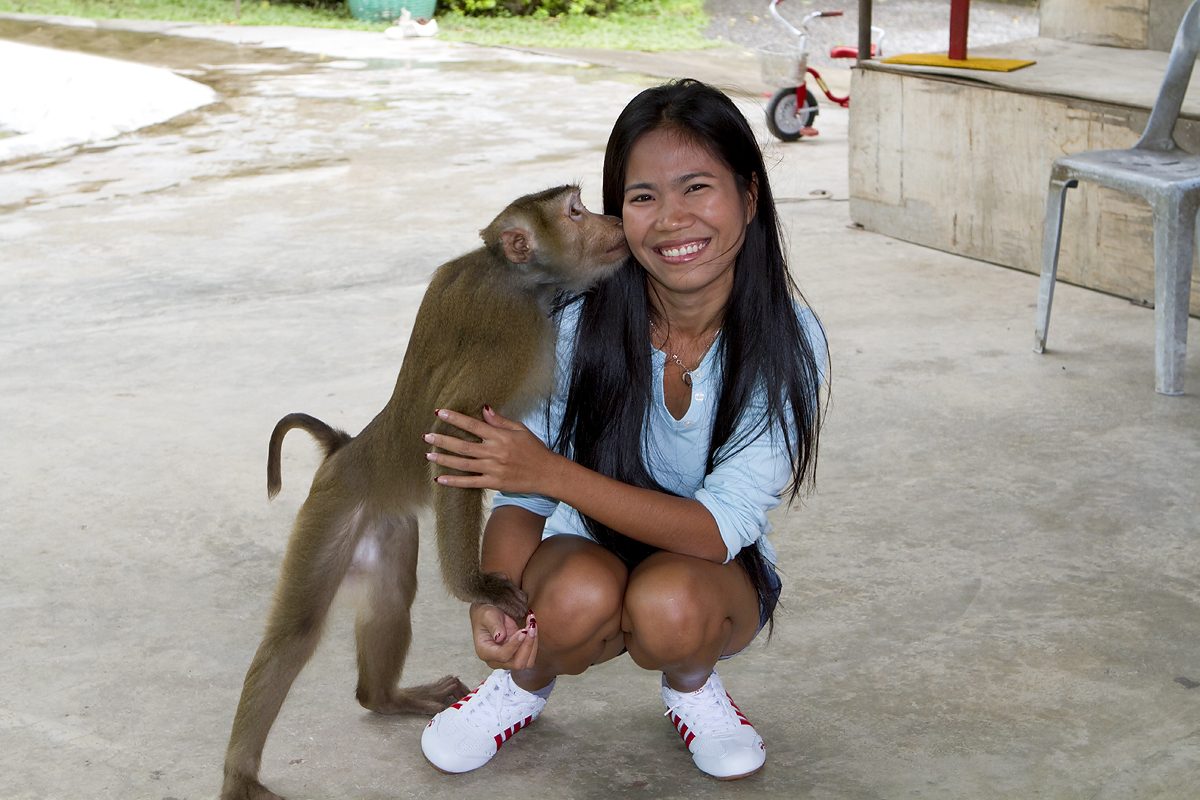 On our second day in Chiang Mai we walked out the hotel doors and found someone that was selling tours. We had wanted to go see some of the animal parks we’d read about so we talked him into taking us to the various places for the day.

The first stop was at a monkey school. We weren’t sure what a monkey school was, but we found out that they have about two dozen monkeys that they have been rehabilitating for various reasons with the hope of releasing them back in the wild. To be honest, it seemed more like a circus side show rather than a place for rehabilitation. Some of the monkeys were riding tricycles, others were playing basketball, and one of them was walking around selling mosquito ointment. Perhaps they were being trained to get jobs rather than living in the wild. One of the monkeys was named Sam and he had a thing for New. He followed her around and liked to give her a kiss.

After we left the monkey school we stopped at a snake show. They had a large ring like you’d see in a circus that was about 20 feet in diameter. Inside the ring they brought out different snakes and had men “play” with them. They started out with a guy working with two small cobras. When I say small I mean about 3 or 4 feet long. Trust me, they were small in comparison to what was to come. The men would stare down the cobras and tap them on the tails and head prompting them to hiss and strike out. Nobody managed to get bit, but it looked likely.

Once they finished with the smaller snakes they brought out a King Cobra. This guy was HUGE. I think they said it was 3.5 meters long, and it looked to be about the diameter of my lower leg. Some guy got in the ring with it and stared it down until he was able to lean over and plant a kiss on top of the snake’s head. Crazy stuff.

After we left the snakes we headed over to Tiger Kingdom. This place is set up as a conservatory for tigers, but it appeared to be more set up for tourists. They had several tigers in various sizes on display and you could pay to go into the different enclosures with them to take photos. We chose 4 different sizes ranging from 4 months up to 2 years old.

We started with the 4 month old tigers. They were enclosed in a large cage/room that was about 40 feet across and about 20 feet wide. There were about 5 different tigers that were wandering around or sleeping that we could interact with. We were encouraged to lay down with them and lay our heads on their backs. The only rules were that we couldn’t touch their front paws or their heads, or approach them from the front. Forgetting that these are wild animals we treated them as if they were domesticated house cats. We felt a false sense of security even though they are still wild animals, but the tigers didn’t seem to mind our presence and let us move around without any problems.

We worked our way through the different enclosures and finished with the largest of the tigers. Even though it was considerably larger than the others we still didn’t feel any danger, although we knew in the back of our minds that what we were doing was ridiculous. We posed with the tigers, laid down on their backs and rubbed their bellies. It was quite an experience.

Our next stop was out at an elephant camp. There were several of these camps located alongside a river that offered rides on the elephants and shows. We arrived too late for the show, but I went for a 45 minute ride on one of the elephants. New and Foi didn’t want any part of the elephant, which is too bad because it was fun. The elephant took me down by the river, up into a small village and then out among the rice fields. It was better than any elephant ride you could take in a zoo.

Our last stop for the day was a small village that had “long neck” women. Up in the hills of Thailand there are tribes of people that as part of their culture have women that add brass rings to their necks starting at youth, that over the years extend the length of their necks. Unfortunately, someone thought they’d make a good tourist attraction and built a small village near town and brought in some of these women to put on display. They make various arts and crafts to sell to the tourists and pose for photos. Like the animals we’d visited earlier, we left them feeling like they were being exploited. It was interesting to see, but after we learned about their situation on the way back to the hotel we felt guilty about going.

It was an interesting day and we had fun, but I think I’ll stick to the zoos from now on, or if I’m lucky, I’ll get to see these animals in their natural surroundings.