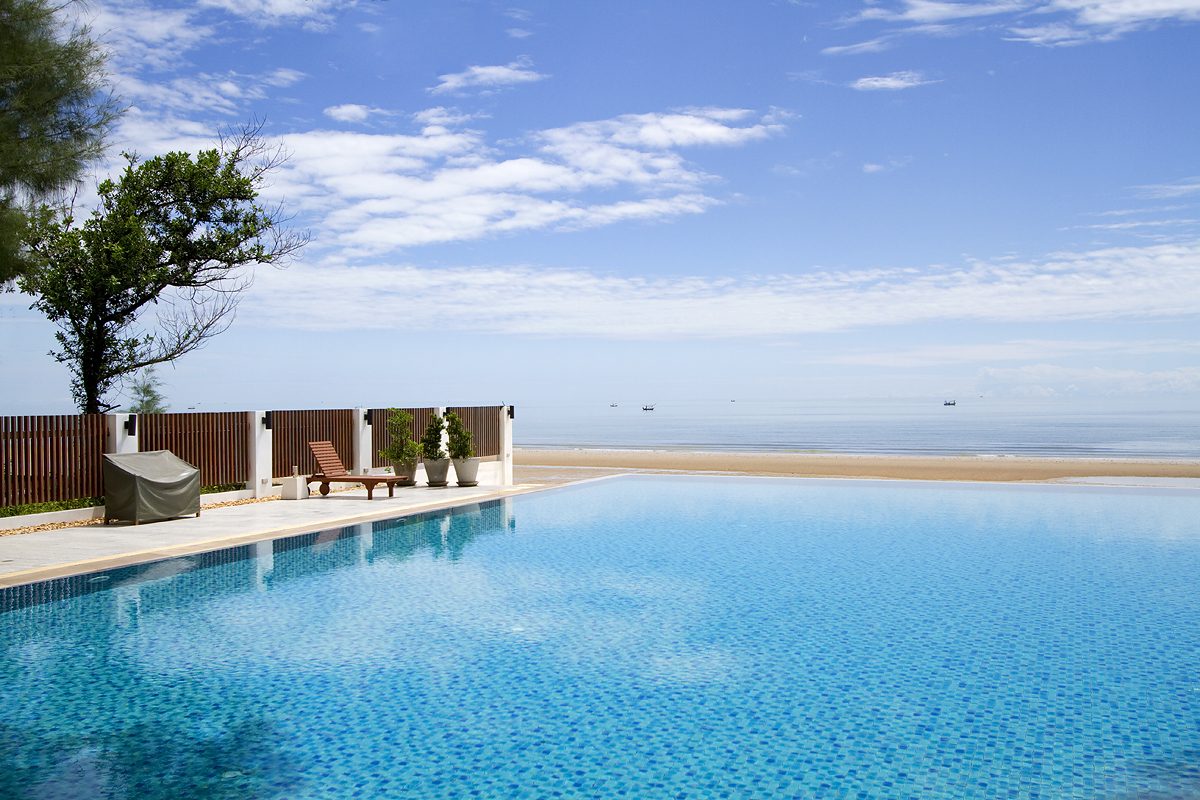 A day after we arrived back from Vietnam we got a call from one of New’s sisters. She and her family from Italy were staying in a city named Hua Hin located on the west shore of the Gulf of Thailand, about a three hour drive south from Bangkok. They wanted to know if we wanted to join them for a few days. Not having anything planned other than doing some quick laundry we decided to head down the next day. New’s son came along, as well as her Mom and other sister with her daughter. It was a full car.

When we arrived to the hotel we’d be staying at we were told that due to our last minute plans to come down we could only stay for one night before needing to move to another location because other guests had reserved the rooms we’d be using. The hotel was a little far from the main road, but it was really nice. It consisted of about 6 rooms surrounding a swimming pool with a Meditteranean theme. It was disappointing to find out we could only stay one night, but we understood.

The kids spent the afternoon swimming while the adults hung out up on a patio overlooking the pool area. We had a big seafood dinner and sat around the pool talking until the mosquitos changed our plans. The next morning we took our time getting ready before heading to the new location in the afternoon.

We ended up staying at a villa up in the hills above Hua Hin for the next 4 nights. Everyone had a room to themselves and there was a nice swimming pool out front. This place was nicer than the hotel we left so everyone was happy.

We spent most of time during the day hanging out by the pool and then we’d head into town in the evening for dinner. New’s sister’s husband is from Italy so one night we found a good Italian restaurant. It was nice eating a more familiar meal after a couple of months of Thai food.

One evening after dinner we walked through the town for a while before ending up at a small lounge. There was a pool table next to the area we were seated at so everyone took turns trying to look like they knew what they were doing. We weren’t going to impress anyone, but we had fun.

On a couple of the days we decided to go to the beach. As is with most beaches in Thailand we found that the beaches were lined with umbrellas and tables. We spent most of the time relaxing and eating seafood with a couple short walks mixed in. A few of the people went swimming, but the water was a bit rough for the little ones.

On our last day in Hua Hin we went to a temple named “Wat Huay Mongkol”. The temple has a huge statue of a prestigious monk named Luang Pu Thuat up on a large pedestal outside of the monastary. Many people go there for worship, but it’s also popular for tourists to visit. At the top of the steps of the pedestal people would make offerings to Buddha and pray before placing small pieces of gold leaf on a statue. There are also gardens you can stroll through surrounding the temple.

After leaving the temple we went to a vineyard for lunch a few miles outside of town. I learned that the vineyard is owned by the same guy that owns “Redbull”. He bought the land a few years ago hoping to start a winery, but found out that the grapes that were produced did not make very good wine. He decided to tear out the wine grapes and plant table grapes instead. They do sell wine in the gift shop, but it’s imported from other areas. They do sell a lot of grape juice, jam and other food items from the grapes grown at the vineyard, though. The food at the restaurant was very good, too. The one thing that I will always remember about the vineyard, though, is looking out over the land and seeing two large elephants walking down one of the dirt roads between the fields. The vineyard also offers elephant rides to it’s customers. It’s definitely something you won’t see in the Napa Valley.

It was a fun time in Hua Hin and it was nice being able to spend so much time with New’s family. Hopefully we’ll get to spend more time together before we all head back to our different corners of the world.