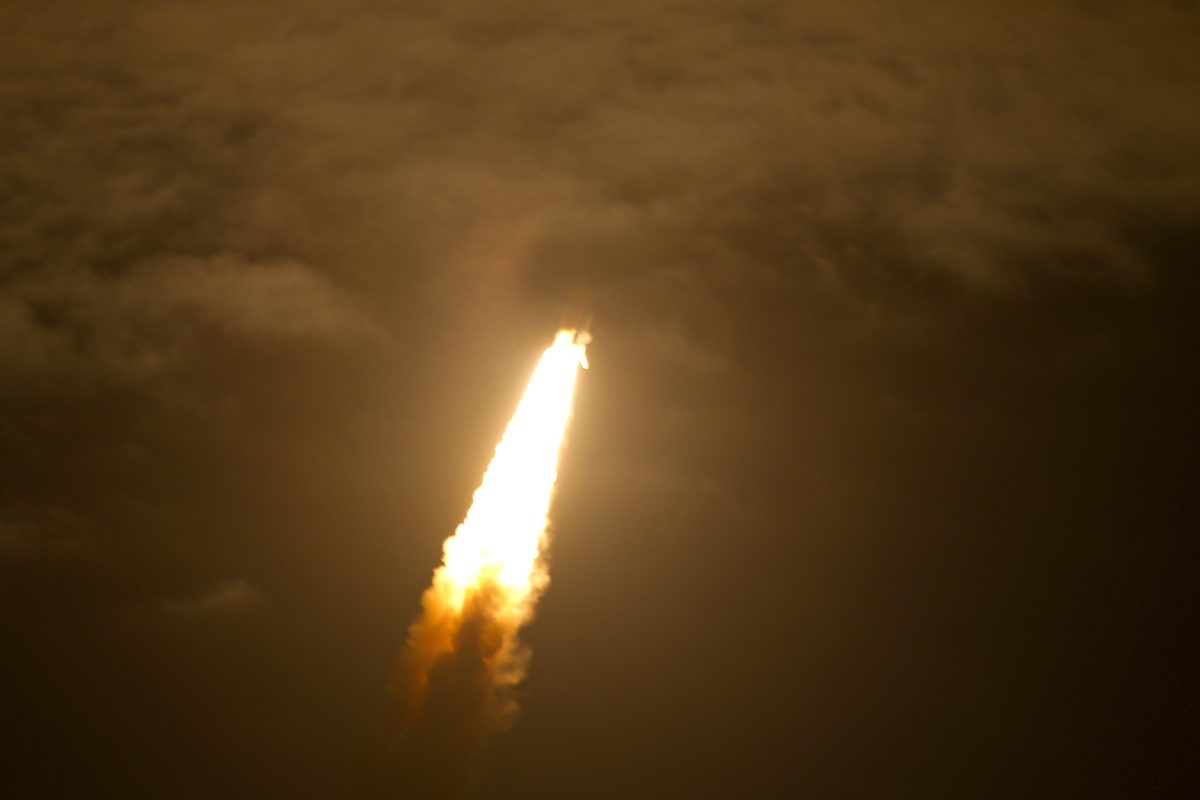 So, what did you do last weekend? Me? I finally did something that I’d been wanting to do for a very, very long time. I almost waited too long, though. 2010 marks the last year that the Space Shuttle program will be in operation with only 5 launches remaining on the schedule. The first of the five launches would also be the last night launch for the shuttle program.

We hopped online about 30 days prior to the launch when tickets went on sale to the general public. NASA was using a new system for distributing tickets online so we weren’t sure if we’d get any. Between our three computers at home and our two mobile phones with internet access we felt our odds might be pretty good. Sure enough, we were able to get into the system and purchase our tickets before they quickly sold out. We were two of the few thousand lucky enough to have tickets. Yes!

The launch was scheduled for 4:39am EST on Sunday, February 7th. Our plans were to fly to Orlando on Friday the 5th and stay through Tuesday the 9th just to give us some time in case there were any launch delays, which are very common. Anything from weather and technical issues can cause a delay, especially when there is only a 10 minute window for the shuttle to launch.

We flew out on Friday morning and arrived at our hotel later that night. We had to be at the Kennedy Space Center by 10:30pm on Saturday so we had time to kill early in the day. My wife’s always had a fascination with Manatees so we tried to find some areas to go view some. It turns out that there’s a power plant near Tampa that attracts a lot of manatees with the warm water that pours out of the plant. When we arrived at the viewing area we found several dozen manatees lazily swimming in the water. They were a little difficult to see in the murky water, but once in a while they’d pop up and you’d see their noses sticking out for a breath of air. Farther up the waterway we could see small sharks and rays jumping out of the water every now and then. It was quite a scene.

After spending a couple of hours at the viewing area we decided to drive back to Orlando, grab our things and a bite to eat, and then make our way to the Kennedy Space Center. We didn’t need to be there until 10:30, but since we had nothing else to do and we were a bit anxious we decided to get there early.

We arrived at the Visitor Center at 7:15 and were told we could park our car, but couldn’t leave the parking lot until the center opened up at 9:30. By 9:00pm we could see quite a few people starting to line up at the front entrance so we decided to join them. We didn’t know the full procedure so we figured it was best to just see what other people were doing. The doors opened up at 9:30 promptly and we entered the Kennedy Space Center. There were a lot of exhibits open, an IMAX theatre showing two movies, cafes and a couple of bus tours that you could keep yourself busy with until the launch.

We knew we had to take a shuttle bus out to the viewing area so we didn’t want to get too busy with things and get stuck in the back of a long line. Many of the people at the center were going to watch the launch right there, but a few thousand of us were going to the “Causeway” for the viewing. The center viewers wouldn’t get to see the shuttle on the pad, and they wouldn’t see the actual launch until the shuttle was already on the way. This is due to buildings and trees that blocked their view. On the other hand the Causeway offered the closest viewing to the public and had unobstructed views of the launch pad. The tickets cost a bit more, but were worth it.

The buses out to the Causeway didn’t start rolling until 1:00am, but we saw that a line was already forming around 9:45 so we just decided to get in line and begin the long wait. Time actually went pretty fast and you could sense the excitement in the crowd. Many people brought chairs, food, music and lots of cameras. Everyone waited patiently, and before you knew it we were climbing onto our bus at about 12:45.

We were on one of the first buses to head out to the Causeway so we had our pick of places to view the launch. The Causeway is part of the road that crosses the Banana River. It’s about 2 1/2 miles long and is located about 6 miles from the launch pad. You can see the pad directly across the water with only a few areas being blocked by some mangroves. Being there early gave us a chance to get to a perfect spot to set up our chairs without anyone being able to get in front of us. I set up my tripod and cameras and then we waited. The launch was still over 3 hours away when we first arrived, but we didn’t mind since we got a good spot.

We downloaded an app on our iPhones that let us listen to various scanner channels and the Kennedy Space Center communications was one of them. We listened in as we waited and didn’t hear too much until about an hour before launch. The weather was pretty good, but there were some low clouds coming in that seemed to be a concern. A pilot was sent up to fly around the area and report back to control as to how visibility was. We could listen in on his reports, which provided us with the idea that the launch may not happen. About 9 minutes prior to launch we got the formal announcement that the launch had been scrubbed and that they’d be trying again at 4:14am the following morning. Very disappointing.

We got back to the visitor center around 5:00am and hopped into the car to make the 55 mile drive back to Orlando. Traffic was horrendous and we didn’t get back to the hotel until nearly 9:00am. We set our alarms for 4:00pm and fell into bed. When the alarm went off we cleaned up, grabbed a quick bite to eat and started the process all over again. Back out to KSC by 7:00pm and start the wait again.

Clouds were a concern again as the night rolled on. We listened again as the pilot went up to look things over. The weather was code red, which meant the launch was currently a no-go. Finally with about 45 minutes to go we heard the pilot state that the clouds were thinning out and he had good to great visibility. On both nights there was a PA system set up at the Causeway for everyone to listen to an announcer make status updates as well as explain what was currently being done to prepare for the launch. The discussion was usually without any emotion and just stated what was being done.

With about 15 minutes to go for launch a very upbeat announcer came on and said “Launch is a GO!”. The crowd erupted and goosebumps ran down my neck and arms. After another minute or two the person in charge of Launch Control came over the loudspeaker to speak with the Shuttle Commander. He basically said that the shuttle was in fine condition, the weather was cooperating and that “you’re good to go”. The Shuttle Commander responded with some thanks to everyone for the preparation and then said “we’ll see you in a couple of weeks. It’s time to fly.” The crowd once again went nuts and the next 9 minutes went by very quickly.

What happened between T-30 and the following 10 minutes is a blur. Television and film cannot do justice to what you experience at a launch, especially at night. At about T-6 you see the main engines ignite and then at T-zero you see a huge burst of flame and smoke. The once black sky is now so bright it looks like day with an orange tint. Being 6 miles away you only see what’s happening. After several seconds you finally feel and hear the explosion of the engines that are sending the shuttle off to space. The shuttle looks like it’s going up in slow motion, but in reality it’s going thousands of miles per hour up to a top speed of 17,500+ mph.

We needed to get back onto the bus to get back to the center, but not before watching the shuttle disappear into the now black again sky. It had been a long two nights in cold weather, but not one person was heard complaining. Everyone seemed to acknowledge that they were witnessing history and that they were very fortunate to experience this. After the last launch this year takes place there is no idea if an opportunity like this will every be available again.

Due to the fact that we spent our time at the visitor’s center sitting in line instead of looking at the exhibits we decided to come back the next day to see everything. Instead of driving back to Orlando and fighting the traffic once again, we decided to just sleep in the car. We reclined the seats and closed our eyes to a much needed sleep. Around 10:00am we rolled out of the car and spent the rest of the day walking around taking in the sights. We even got to meet a retired astronaut that had been up in the shuttle twice.

All in all it was a great trip, albeit a very tiring one. We’re thankful for the experience and may decide to go back for one of the remaining launches. I don’t know if it can compare to this one, but if it’s even half the experience it will all be worth it.