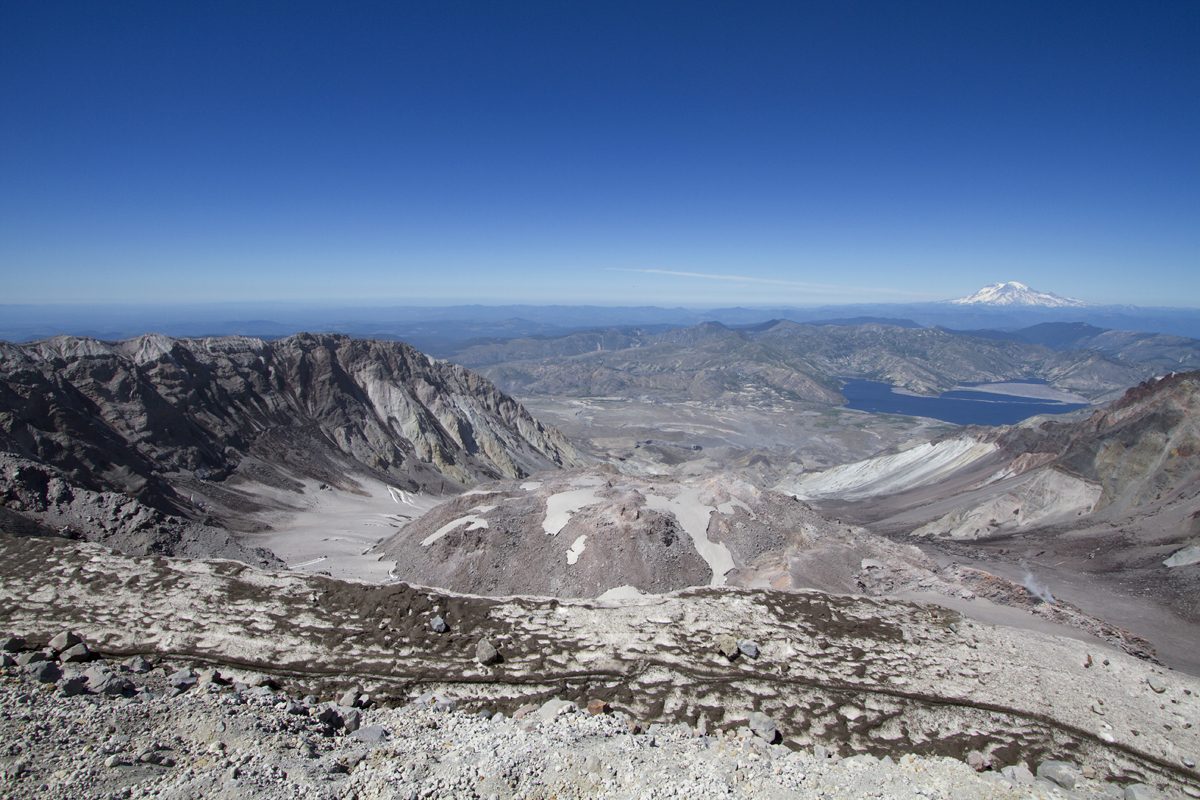 I received an invitation from my high school friend Tim that I’ve kept in touch with over the years. Last year I drove up to Washington to hike on Mt. Ranier with him and his son and one of his daughters. This year he applied for a permit to hike up to the summit of Mount St. Helens and wanted to know if I was up for it. I jumped at the chance and looked forward to the challenge.

Last Thursday, Rotchana and I packed up the car along with Victoria and our dog to make the 600 mile drive up to Washington. I had to work the night before and Friday was the day our permit to hike the mountain was valid so we pretty much had to make the drive in one day.

We drove for about 3 hours and stopped for breakfast in Redding. After filling up at IHOP we continued on until we got about halfway through Oregon. The girls spent most of the time sleeping so the drive was pretty quiet. I filled up with gas just short of Portland and we finally arrived at our hotel in Woodland, Washington around 6:00pm about 12 hours after we started. A quick pizza later and we settled into the hotel for the night. Around 11:00pm my friend Tim, his son Danny and a friend, Ken, stopped by the room after they checked in so we could make plans for the next day’s hike.

We met downstairs in the lobby around 7:00am for a quick bite to eat and then we left for our hike. The girls stayed behind to continue sleeping and relax while the guys took off to punish ourselves.

We had a quick stop in a small town named Cougar to get our permits and check in for the hike. It was required that we sign in and sign back out at the end of the hike, otherwise there would be search parties out looking for us later that night. We filled up with some extra water and then drove another 15 minutes or so to the parking lot where our trail would begin.

After parking the car we changed into our hiking gear and then started our way up the trail about 9:20am. The first 2 miles were fairly easy with a gradual climb of about 1,300 feet. The trees provided some nice shade with only a few flys randomly buzzing us. Having done some research before driving up for the hike we all knew that this was going to be the easiest part of our climb. Little did we know how hard the remainder of the climb would be, though.

Once we reached the top of the treeline we saw a sign stating that permits must be in possession for anyone going above the 4,800 foot marker. Only 100 permits are given out each day and there is no camping overnight. From what we could tell, there were far less than 100 permits claimed. We’d only seen one couple so far and starting any later in the day would probably mean not having enough time to make it to the summit.

The trail ahead of us looked very daunting. We knew we’d be crossing boulder fields, but it was hard to imagine what that meant until we arrived at the first one. Thousands upon thousands of volcanic boulders marked the direction we had to go, which was pretty much straight up the mountain. We all had taken heed of the suggestions to bring gloves as we’d need them to pull ourselves up the rocks at times. The boulders ranged from a few inches in size to several feet and often times we had to pull ourselves up to keep going.

Every time we reached what we thought was a peak, it turned out that it was only blocking our view of the next boulder field we had to traverse. It was tiring, but we had no idea that what laid ahead would be so much more work.

A few hours later and about 2,500 feet higher we finally reached the last portion of the climb. We were only about 1,000 feet or so from the top, but it would take a couple more hours just to make it. The boulders had been replaced with loose ash, pumice and pebbles. It felt like walking on the beach, but at a 20 degree or more angle. The trekking poles definitely came in handy, but we still had to stop every 5 minutes or so to let the burn in our legs calm down. The hike became a battle of will at that point. It was a matter of when and not if, but I can see how some people might have called it quits.

Just shy of 6 hours after starting our hike we made it to the crater’s edge and it was quite a relief. The view into the crater was pretty impressive and helped us forget how tired and sore we were. Even as we were standing on the edge of the crater it was hard to believe where we were. I never thought I’d be standing on the edge of a volcano that had recently blown it’s top off. We were fortunate to have perfect weather and could see Mt. Ranier, Mt. Hood, Mt. Adams and another peak far off to the south.

After spending about 45 minutes taking photos, resting and having a big snack we decided to head back down the trail. The trip back down was a lot more fun and not as much work. What took a couple of hours just to climb up the last 1,000 feet only took about 10 minutes. It was almost like skiing down the soft surface except it was rocks instead of snow. We then hopped onto the snow fields next to the boulder fields and made our way down along the edge. This saved a ton of time, even though it was tiresome and we had to be careful of not losing our footing. One wrong slip and we could be headed down a snow field far from our trail and possibly injured.

We finished up the trail before the trees climbing down over the boulders because we weren’t sure if the snow fields would keep us in the right direction. Climbing down was easier than going up, but it was still precarious. One wrong step and someone would need stitches or worse yet, a helicopter ride back down the mountain.

Once we made our way out of the boulders and back into the trees it felt like we were home free. 2 miles still separated us from the car, but we had a quick pace heading back. About 45 minutes or so later we had finished our 3 hour hike back to the car. We were all sore, dirty, tired and hungry. Dinner was at the top of everyone’s mind at that point.

After we checked back in at Cougar we made our way to the hotel. I changed clothes quickly and grabbed the girls so we could go back to the pizza place where everyone else was waiting for us. After downing some pizza and pasta we said our goodbyes and we went back to the hotel. Tim, Danny and Ken left to go back home since they only had a few hours drive.

The next morning we checked out of the hotel and made our way down to Portland. We made a small detour to go see Multnomah Falls. I knew Rotchana would enjoy seeing them. Once we arrived at the falls we had to walk about half a mile to the falls since all the parking was taken up. Rotchana was a trooper and even carried Jaidee for a bit. I had Victoria strapped to me and she even enjoyed it.

We spent about half an hour at the falls before making our way back to the car. We still had 600 miles to go and it was nearly 3:00pm by the time we got back on the highway. We stopped in Eugene for dinner and made plans to stay at a hotel in Ashland for the night before finishing our drive the next morning.

We arrived in Ashland about 10:30pm. Victoria had been doing awesome the entire time in the car, but started to get cranky about 20 minutes prior to getting to Ashland. At that point we just wanted to get to the hotel so we could all rest and get some sleep. Unfortunately, the hotel greeted us with an apology stating that they had overbooked the hotel and they didn’t have a room for us. Pretty frustrating, especially given that it was a Saturday night and nearly 11:00pm. Every hotel along I5 was booked for the night for the next 200 miles.

We ended up stopping at a rest area just south of Yreka and slept for about 4 hours before hopping back on the highway. That lasted only about an hour before I felt I needed to rest some more. We stopped at another rest area for about 3 hours before driving down to Red Bluff. We stopped at Denny’s for breakfast and then drove all the way home from there.

What took us 12 hours to do going up on Thursday turned into nearly 24 hours coming home. We were all glad to be home at that point. I’ve got two small blisters on my pinky toes, a pretty good sunburn on my neck, and a lot of sore muscles, but it was still a lot of fun. Even the girls enjoyed getting out depsite the long time spent in the car. I’m glad we went as I always enjoy time spent with Tim and his family. The hike was a lot of fun, too!