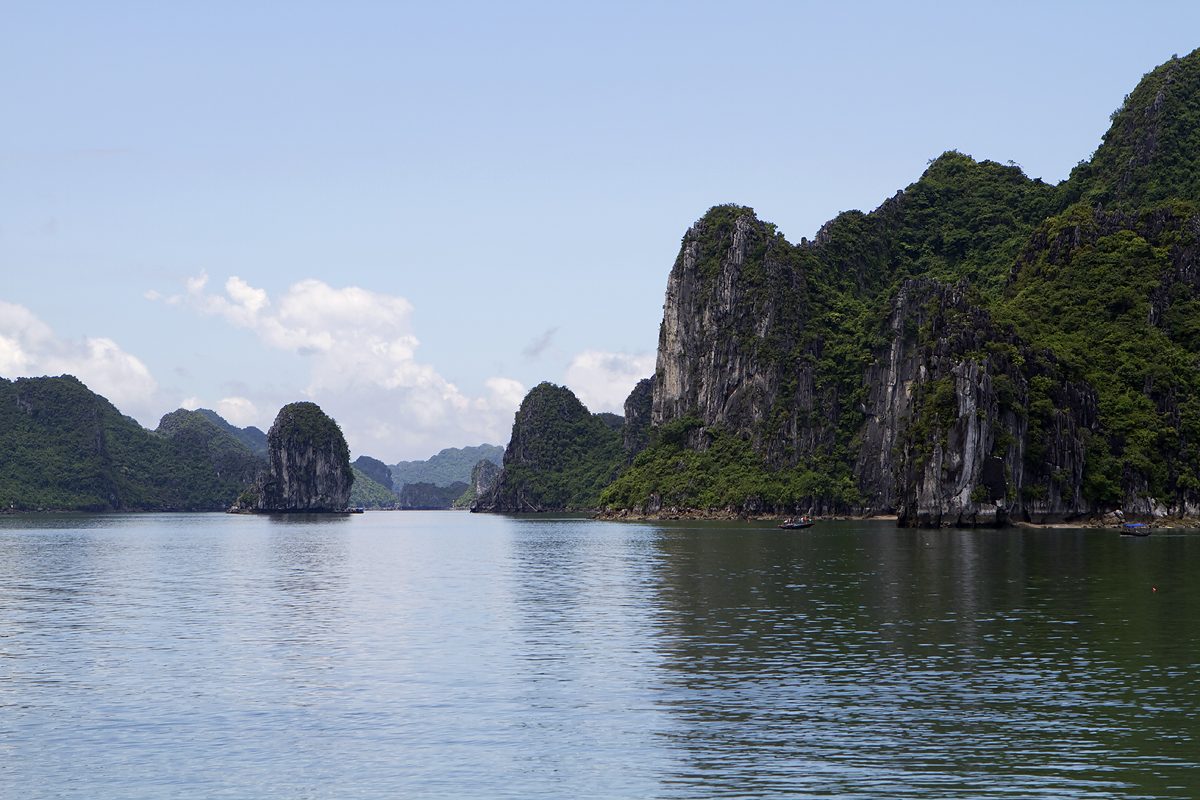 During our visit to Vietnam Linh’s family treated New and I to a couple of days at a small city along the coast named Ha Long. The city has quite a few hotels, some shopping and a nice beach, but the main attraction is the bay with the same name, Ha Long Bay.

Ha Long Bay consists of about 1,900 limestone isles and was named a UNESCO World Heritage site back in 1994. In 2009 the New 7 Wonders Foundation, which runs the New Seven Wonders of the World program, included Ha Long Bay on its list of nominations as one the World’s 7 Natural Wonders.

We left Hanoi fairly early in the morning to make the roughly 140 kilometer drive to Ha Long City. The highway was one lane in each direction the entire way so the going was fairly slow despite everyone driving along the shoulders and passing on both sides of the road. We stopped for lunch about midway and then once again for a short break to buy some fruit that was being sold alongside the road. We bought a few different fruits, but the best were the small pineapples. They were about the size of a softball and were very sweet. They were better than any pineapple I’ve had in Hawaii or anywhere else for that matter.

When we finally made it to Ha Long City we checked into a small hotel and then went to the beach for a short while. Linh and her family went swimming while New and I walked along the beach taking photos. You could see the isles off in the distance and it made for a nice view. Just before heading to dinner Linh and her sister decided to go parasailing. I think they were both a bit nervous at first, but ended up having a great time.

After we finished dinner we went to an island close to the city that we could get to by a long bridge. On the island was a small theme type of park. I didn’t see any big rides, but there were some small ones and a large amphitheater for a dolphin and seal show. We went to the show and the first thing they did was have a seal use different paint brushes to paint a picture, and then they auctioned it off to the crowd to help raise money for the wildlife program. Linh’s little brother stood up and aggressively bid on the painting until everyone else dropped out and he won. To our surprise he presented the painting to New as a gift. We’re not sure what the picture looks like, but it’s a fun souvenir. After the show we all went to a haunted house at the park and then headed back to the hotel to get some sleep.

Early the next morning we drove down to the marina and got on one of the many boats that tourists rent for the day to travel in and around the isles. We shared the boat with a few other people, but the boat was large enough so we had plenty of room inside to spread out, and never had a problem finding room outside to take in the scenery. We spent about 7 1/2 hours touring around the isles with two stops at different locations to walk through some caves located within the limestone isles. The caves were large and were lighted with different colored lights making a pretty scene, but not very natural. They were interesting to look at, though.

The scenery was beautiful everywhere we went and despite the high humidity it was a nice day out on the water. New was a little worried about getting sick on the boat, but the water was smooth and we never felt any motion. In addition to the two stops to walk through some caves we also stopped at a floating fish market to buy some food for lunch (another huge meal), and we also stopped at one of the isles that had a sandy beach for some of the people to go swimming. All in all it was a relaxing day with some great scenery.

When we arrived back to the marina we hopped into the car and started our way back to Hanoi. Everyone was pretty tired and slept most of the way, but we did manage to stop and take in another large meal before finally getting back to our hotel.