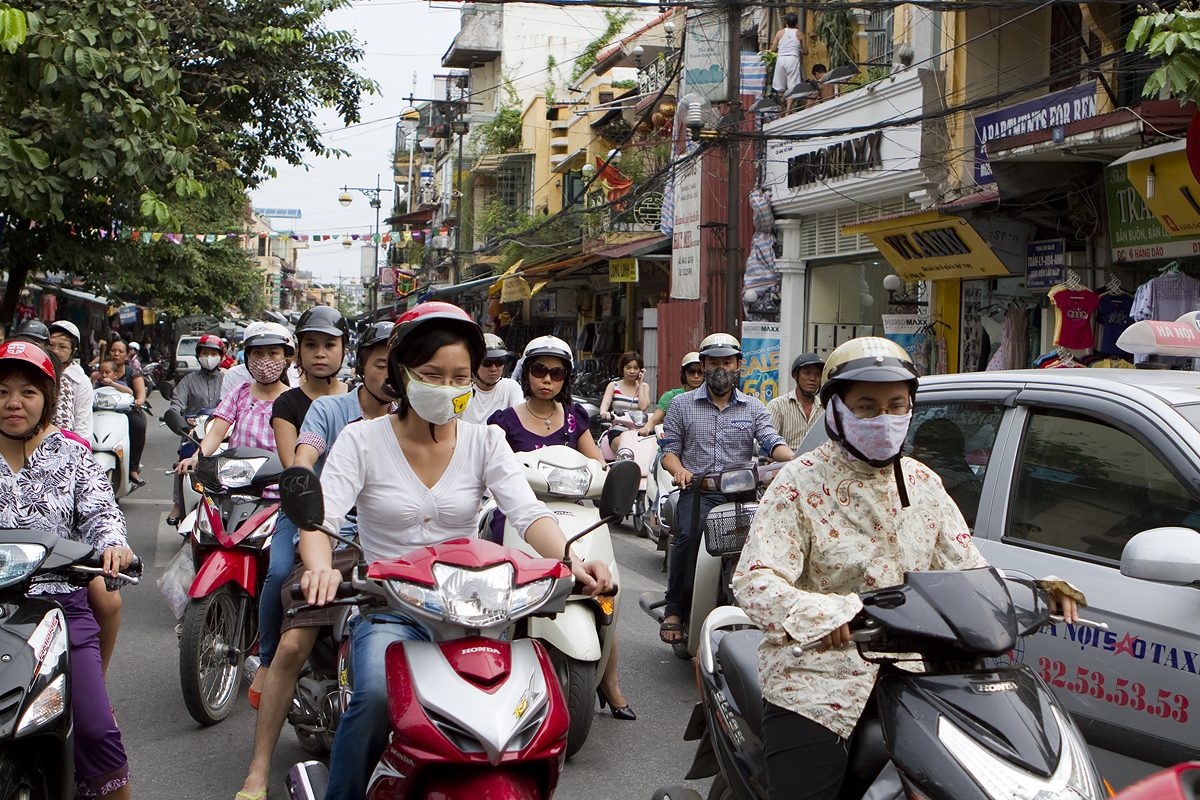 Two years ago I hosted a student from Vietnam that came to the US to spend a year to attend high school. Her name is Linh and she stayed with us for 5 months before moving to another family to finish out the school year. She went back to Vietnam at the end of the school year with the hope of returning to the US to attend college. While home in Vietnam she found a small college in West Virginia that would accept her application and that is where she spent this past year. She returned home once again at the end of the school year to be with her family in Vietnam before returning back to school this Fall.

I had plans to stay in Thailand for about 10 weeks, but my visa would only allow stays of up to 60 days at a time so I had to leave Thailand before 60 days passed and then I could return for the remainder of my stay. The easiest way to do this was to go somewhere close to Thailand and Vietnam was a simple choice. I could take care of my visa requirements, visit with Linh and her family, and visit a place I’ve never been before.

New and I left Bangkok early on August 1st to fly to Hanoi. Our flight was only about 2 hours long and when we arrived it started to pour buckets of rain. Luckily the rain ended before we got our luggage and we didn’t see any rain the rest of our stay. Linh and her Mom met us at the airport and took us into the heart of Hanoi for a bite to eat. New was a little worried about the food we’d be eating while in Vietnam, but was happily surprised to find that it wasn’t too much different from Thailand. She found some noodle soup that she liked and wasn’t worried anymore.

Hanoi is quite different from Bangkok. The buildings are smaller with only a small handful being taller than 5 or 6 stories. The streets are very narrow and are lined with huge trees. I only remember one or two streets that were more than two lanes wide, but lanes don’t mean anything in Vietnam. There are more motorbikes than cars, which explains a little about the driving habits. Vehicles tend to stay to the right, but that is really all there is as far as being an organized method to the madness. Motorbikes zip around everywhere and they don’t look before crossing intersections or entering traffic. It’s up to the cars to be on the lookout, but having said that, the cars don’t slow down or give the right of way to anyone. Drivers hold the steering wheel with two hands firmly clenched onto the horn and just honk their way around town. Pedestrians and other vehicles must always be on the lookout because nobody ever slows down to let them by. Stop signs and lights do exist, but they are very rarely acknowledged. We came to a few intersections with 4 directions of traffic all in a standoff at the center of the intersection. Somehow everyone gets where they’re going. We never saw any accidents, but I’m sure they happen. It’s not for the faint of heart. It’s just something you have to experience to really understand.

We spent our first afternoon with Linh walking around a small lake in the center of the city that has two small islets with temples on them. The smallest of the two is called “Turtle Temple”, but you can’t get to it without a boat. The larger of the two islands has a walking bridge named “Morning Sunlight Bridge” that provides access to the temple named “Ngoc Son”. We spent about a half hour on the islet before heading to a small cafe that overlooks the lake.

We were pretty wiped out after getting up early for our flight and spending the afternoon walking so we went to our hotel to check in and get some rest. Later that night we met back up with Linh and the rest of her family at the restaurant that they own. It was then that we learned a quick lesson about life in Vietnam. They eat several times a day, and not just a little each time. The dinner had several courses and saying you’re full was not an excuse to have them stop giving you more food. This would be a recurring situation throughout our week. There were some days I just couldn’t eat anything, but had to find a way to do so.

We spent the next couple of days just wandering around looking at shops and the area around our hotel. New was a little under the weather so we didn’t want to do too much and take the chance she’d get worse.

On the 4th day of our visit Linh’s Dad, Grandmother, Sister and Brother took us to a small town near the coast named “Ha Long”. I’ll post a separate entry about our visit there, but we spent a couple of days there and had a really fun time.

Our last couple of days in Hanoi were spent sightseeing with a visit to the Ho Chi Minh Mausoleum. Ho Chi Minh’s request was to be cremated upon his death, but despite those wishes a mausoleum was built and that is where his body remains on display daily. Photos aren’t allowed, and when you enter the mausoleum there are two single file lines that you must follow in silence. The body lies in a glass case with dim lights that you walk around to the other side of the room. Military Honor guards keep a watchful eye on everyone that enters and promptly corrects those that don’t follow the rules.

On our last day in Vietnam we attended a water puppet show with Linh and her brother. I wasn’t sure what to expect, but it turned out to be an interesting show. We sat in a theater you’d normally watch a play of some kind in, but instead of a stage there was a large pool of water set up in front of a temple. Underneath the temple hidden behind a dark screen there were people controlling the puppets on a long pole that gave the appearance that the puppets were dancing and moving around the pool of water. On the left side there was an orchestra that played the music for the show and provided the narration. New and I didn’t understand what was being told, but the play was a story about life in Vietnam.

Linh and her family were excellent hosts. They went out of there way to ensure that New and I had a fun time during our visit. They had a driver available for us to take us to and from the hotel, set up a lot of our activities, and made sure we always had a ton of food to eat. Despite having a language barrier to overcome, Linh was able to bridge the gap and allow us to communicate with her family. They invited us back to see some of the other areas Vietnam has to offer. Maybe one day we’ll be back.

One thing I should mention about my trip has to do with the Vietnam War. It’s been roughly 40 years since the US’s involvement, but I understand there’s still a lot of emotion about the subject. I was too young to understand what was going on during and right after the war, and I don’t remember much being taught in school about it, but I went with a small understanding of what happened and that many people still feel the pain of the war. I treated my trip as nothing more than traveling to a new place to visit a friend and experience a new culture. Hopefully those opposed to my visit will understand. The people I met and saw were very friendly and treated us very well.