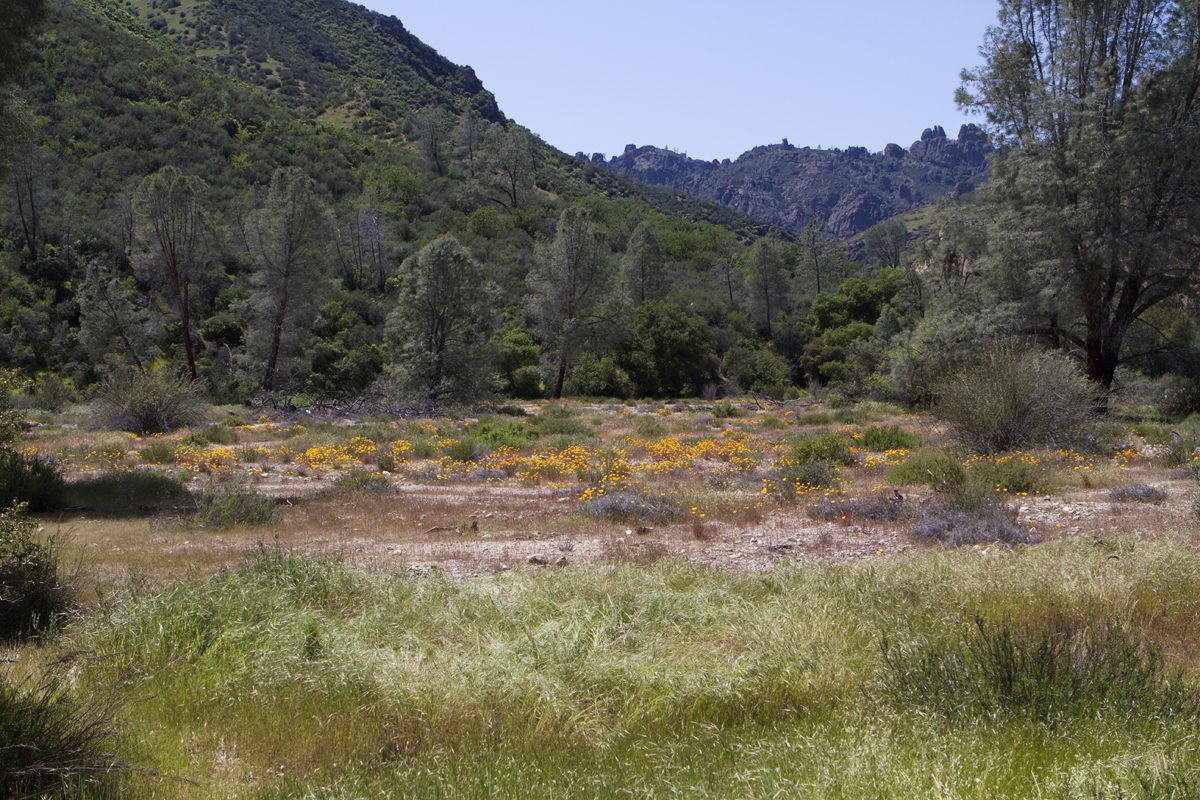 I’d seen signs for Pinnacles National Monument a few times while traveling up and down California’s highways, but never paid much attention to them. The lady that cuts my hair mentioned that she’d just gone and thought it was a nice place to go for a hike and take in the scenery. There’s also a chance to spot a rare California Condor since the park is used as a release spot for the birds that are born in captivity. In any case, since I’d never been before I thought I’d check it out.

The park is located about 2 1/2 hours from my home and about 45 minutes south of Hollister on highway 25 on the east and highway 101 on the west. There are two entrances, but you can’t get from one to the other once in the park unless you hike along on one the of many trails in the park. I chose to enter the park from the eastern entrance for no other reason other than having to pick one or the other.

The parking lots were already full partly due to this week being free for everyone who visits a National Park. It’s a once a year promotion they have and I forgot about it. Fortunately, there was parking just outside the park and they provided free shuttles up to the hiking areas. Once I made it out onto the trails I didn’t see many people. There are over 30 miles of trails so everyone gets spread out quite a bit.

The trails were easy to moderate with some steep inclines in parts. There were some nice views along the trails of the monoliths and spires that remain from an ancient volcano. I hiked along a trail of about 4 miles round trip that took me up to a small reservoir named Bear Gulch. I’d brought a Subway sandwich with me so I climbed up on top of one of the many granite boulders and ate my lunch while enjoying the scenery around the reservoir.

After I finished my sandwich I took another trail back to the shuttle that overlooked more of the boulders and rock formations. I never did see any Condors, but I did hear a lot of people getting excited over thinking they saw Condors. What they really saw were Turkey Vulchers. They look similar up in the air, but Condors are huge and they have very noticeable numbered tags on their wings.

When I was on the shuttle back to the car it stopped a few miles away at another parking lot to let some people off. I decided to get off there and walk back along the river bed that paralleled the road. I didn’t see much in the way of flowers on the hiking trails, but the river bed was full of California Poppies. It made for a colorful walk back to the car.

The weather was really nice while I was at the park. The high for the day was around 73, but anything warmer might have been a bit uncomfortable. There isn’t much shade unless you hang out at one of the two caves along the trails. I’d read that going in May through October is very hot during the day so keep that in mind if you decide to visit the park.